The Icebox is fired up – ice is on the way! 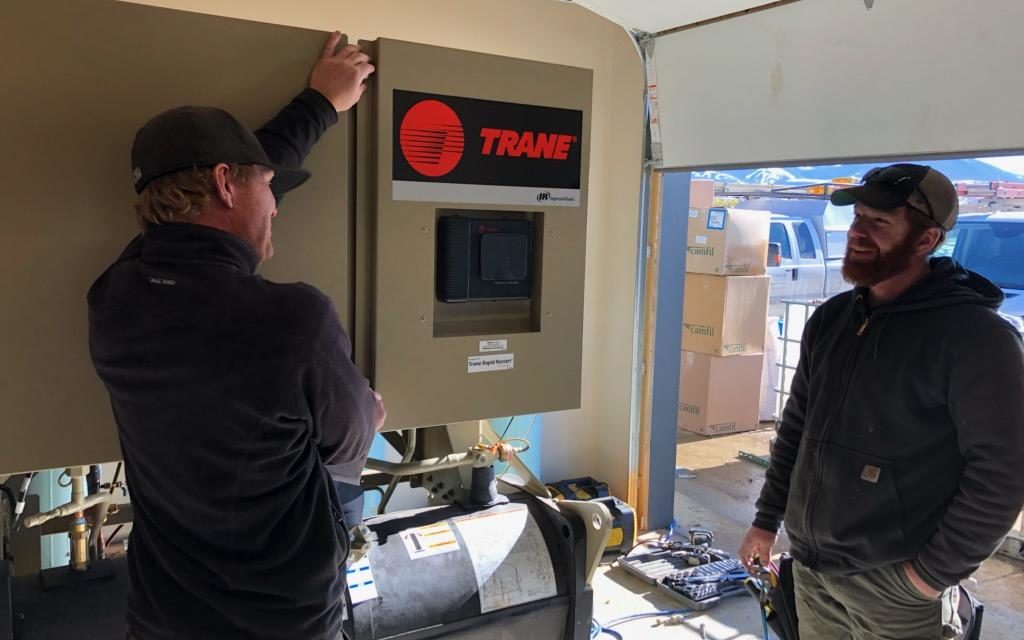 After years of envisioning, planning and fundraising, one of the final components, the refrigeration compressor for the Icebox Skating Rink in Fraser is being wired and fired this week.

The refrigeration system unit is really three components, a condenser, chiller unit and pump skid. The system is a customized piece built specifically for the need of each facility. It provides the circulation and coolant that runs beneath the floor to keep the ice temperature consistent.  Scott Ledin, Fraser Valley Metropolitan Rec District Director of Parks, Recreation & Golf, said the company, Everything Ice, in partnership with Tolin Mechanical, had to build a new unit from the ground up to meet the specs for the The Icebox facility.

Back in August, the company sent a slightly oversized, surplus unit they had been warehousing and thought it might work in Fraser. Ledin said the unit was offered up as another way to save a little money, but unfortunately, when the unit arrived it was damaged and rejected.  A new unit went into production at that time which delayed the project until now.

The new refrigeration system for the facility will extend the season 8-12 weeks and create stable ice throughout the winter, even in the warmest periods. Ledin said, “The system is designed to be able to provide solid ice twelve months a year, but the energy requirements for the summer season would be costly. “One day, the facility may have support for a year-round ice program, but for now, the facility is scheduled to operate from mid-October through April. We would like to mirror the ski area season and maybe open a little early each fall, before the ski lifts start turning.”

The new facility project has cost approximately $700,000.  Ledin said, “Securing the additional funding has really been a grassroots community effort”.  The FVMRD initially committed $100,000 in 2016 to the project which leveraged several smaller grants to start the ball rolling. The town of Winter Park really set the stage by committing $90,000 to the project in 2017, and that, along with $25,000 from the town of Fraser and $35,000 from Grand County, Ledin said, allowed us to leverage those funds to bolster our DOLA (Colorado Department of Local Affairs) grant for $200,000.

Local fund-raising efforts, private donors and individual contributions set the stage for the project. Several organizations stepped up, including the Fraser Valley Hockey Association, Colorado Amateur Hockey Association and Grand Foundation to help bring it all together. Ledin said, “The community has rallied around this project from the beginning and it is finally taking shape”, adding, “we are wiring the new components for the compression system and should be making ice in a couple of days.”

Austin DeGarmo, Fraser Valley Metro Rec District, Parks and Athletics Manager said, “Ice making temperatures have been favorable for making a natural sheet of ice for several weeks. However, we needed to make sure the new system is operating and cooling as it should.”

Building a solid skating surface takes a little patience, as you create thin layers at a time to build a solid surface that will hold up to heavy use. DeGarmo said, “It will take us 3 days to make ice, once we finish wiring the system. Hopefully, we’ll complete the wiring and testing this week and should be open for business before next weekend.”

Ledin said, “The community has rallied around this project from the beginning and it is finally taking shape. I’m looking forward to putting on the skates this season.”

The new compressor unit has been the biggest question mark for the project’s completion date and now all the hard work has paid off. Let the games begin!