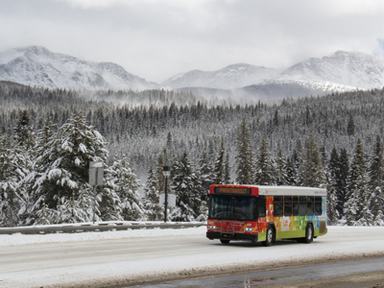 At the Transit Advisory Committee (TAC) meeting on May 21, Winter Park Transit Manager, Michael Koch, gave an update on the recent Colorado Association of Transit Agencies (CASTA) conference he’d attended the previous week in Greeley. Koch told the committee that the conference was “fantastic”, and afforded him the opportunity to discuss the community’s upcoming transit projects with other systems and gained insight on best practices.

Koch and committee member, Mike Fudge, of First Transit, had also just engaged in a pre-construction discussion with manufacturer, Gilig, on the next two 35’ buses to be added to the fleet in early 2019. The new buses will be very similar to the buses that were recently dedicated, with a few changes to diagnostic tools and added higher horsepower, from 280 to 320 hp. The added horsepower will help at railroad crossings, and at only $2,400 per bus, it’s worth the spend. Koch said they will also look at ramping up existing bus horsepower and will report costs back to the committee for consideration.

Koch then told the committee that he had just been advised the current automated vehicle location (AVL) system, RideHop, would cease operation on September 3rd. This doesn’t give much time to find another system and Koch has already begun assembling a team of stakeholders to obtain feedback on what they’d like the next system to look like like. Koch said he knew what he’d like for reporting, but would like input from others, such as drivers and end-users, to improve user-friendliness and information sharing. The system also needs to be iPad-compatible to work with existing driver software. Since the switch had not been anticipated this year, Koch will need to reallocate 2018 budget funds to finance the conversion and all marketing materials such as signage, maps and guidebooks will need to be updated as well by Fall 2018.

Koch was optimistic that they could develop a request for quotes and make a decision by July with the goal of launching the new app in September. He told the committee that rigorous training of the new system will be given to all drivers and extensive communication with the public are key factors for success of the switch.

Once the new app is launched, they’ll begin looking into equipping older buses with security cameras. The newer buses have up to 12 cameras placed in and on the vehicles and have helped with accident and incident investigations. It would benefit the system to be equipped with the technology on all buses.  Cost, IT infrastructure and compatibility will all be factors in the assessment.

While ridership in the winter 2017-2018 season was relatively the same as the previous year, changes in service schedules are being reviewed. The Green Line has been stretched to the point of being tapped out, and Koch is looking into the feasibility of adding a second bus during peak periods. With several new development projects underway along the route, and the “park and ride” use in Old Town on Fridays, growth can most certainly be expected.

The next TAC meeting was set for June 18. For more information, visit the Town’s website: wpgov.com