Spirit of the Lake Regatta

On August 12, a unique breed of athletes will descend upon Grand Lake. They come armed with graceful blades – miracles of Archimedean & Euclidian physics – the paddle and the oar. They will be racing in the 5th Spirit of the Lake Regatta, in what is called a Head Race. The term was born in London, where the first rowing head races were held in the 1700s. Although those races were much closer to the mouth of the Thames than the head of it – the Spirit of the Lake truly is a head race, uniquely held at the head/source of the mighty Colorado River. As Tim Hodsdon, regatta co-founder explains it, “The venue is the headwaters of one of the greatest rivers in the world, and a fragile eco-system, on the brink!” 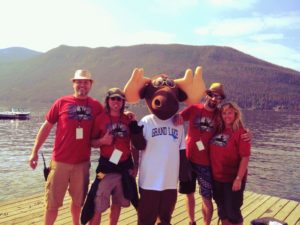 Co-founders, Hodsdon & Munn, decided that the event should be hosted by Infinite West, a local sustainability group. Infinite West champions conservation and responsible stewardship of land and water. “We wanted the event to reflect those principles,” says Hodsdon. “It makes sense – the entire regatta is about clean-running, self-propelled watercraft, on a lake that forms one of the headwaters of a river that has shown up on American Rivers’ Most Endangered list more than once. We felt strongly that this regatta should be open to all. With divisions for rowing shells, canoes, kayaks and stand-up paddleboards, and even traditional wherries & dories, you can pretty-much show up with anything that floats and a paddle to enter the race.””

Devotees include the Rocky Mountain Rowing Club, who have supported the Spirit of the Lake since its inception in 2012. “We have been fortunate enough to see their fearless rowers on our high-altitude waters, rowing their hearts out,” Hodsdon beams.

And, of course there had to be beer! “The Spirit of the Lake is meant to be a celebration,” says Hodsdon. So, the Grand Lake Brewfest was born and the name “Brews and Crews Weekend” was adopted for the combined events, coined by regatta committee member Ken Fucik.

In the spirit of conservation, organizers challenge themselves to make the Spirit of the Lake a more sustainable event every year. They discovered that local GCWIN’s Watershed Week programs get kids outside, studying watersheds and human impacts on the environment. Now the Spirit of the Lake helps fund those programs. Thanks to a mobile solar plant donated by local solar company Simply Efficient, the Grand Lake Brewfest is the world’s first fully solar-powered beer festival. Infinite West has incorporated the concept of Zero Waste. Everything from the event is either re-used, recycled or composted. Once again, Infinite West is proud to offer organic food for participants’ health and enjoyment. 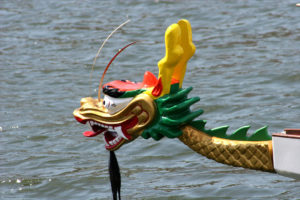 Every year we find new ideas and ways to expand upon our mission of educating, raising awareness, and generating funds to programs that deserve/need it the most. The newest addition to this amazing fundraiser is the non-profit DRAGONBOAT CHALLENGE, which pits two, ten-seat Dragonboats against one another, in attempt to beat the other to the finish line! All while developing camaraderie, raising funds for their cause, and having a whole lot of fun on the lake! Organizations may reserve a Dragonboat to race through Infinite West. Individual members of your Dragonboat team (and anyone with your organization) can then raise money through pledges received when the fundraising link page (that Infinite West creates for you) is shared with friends, family and anyone who wants to support your cause. To cover up-front costs of bringing the Dragonboats to Grand Lake, we are asking that each participating boat pitch-in $200 for the opportunity to race. This event is open to all businesses, individuals and organizations. The caveat is that after paying for one’s boat, any sponsorship proceeds go to the chosen charity of choice. There will be awards for the three fastest dragonboats, as well as best-themed boat award! Winners will be announced at the Grand Lake Brewfest after the race. So, dress up and have fun! 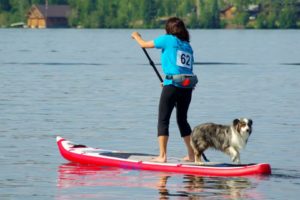 Along with our newest event, we have embraced a new cause that fits right in with our ideals and focus of water issues here in Grand County. Outstanding Grand Lake (OGL) is a non-profit arm of The Grand Lake Chamber. OGL is a citizen and community-driven effort to promote conservation and economic development in the town of Grand Lake and to provide education to residents and visitors on the Upper Colorado River Watershed. Its mission is to promote sustainable development through environmental education & eco-tourism, while recognizing that a healthy lake is correlative with a thriving business community. The Outstanding Waters designation will support national and Colorado values that include: enjoyment of a recreational treasure such as boating and fishing around the nation’s highest yacht club, the uniqueness of Colorado’s largest and deepest natural lake, and an aesthetic focal point for Rocky Mountain National Park which attracts over 3.5 million visitors from around the world each year.

Infinite West is committed to sustainability in Grand County and rural rocky mountain communities. We aim to increase awareness about watershed resiliency, water clarity, conservation and ecology. We support Grand Lake’s goal to become an Outstanding Waters Designee. This event offers an excellent platform for these educational missions – a place to model exemplary stewardship, as well as an opportunity to have fun while raising money for our great local nonprofits.

We look forward to paddling our way to fun fundraising with you!