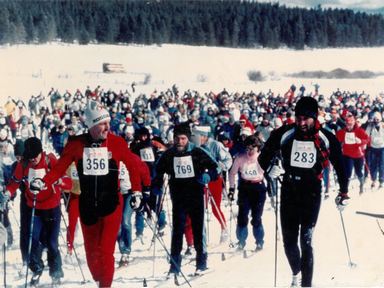 In 1895, Karl and Della Just purchased rights to a sod-roofed log cabin situated along Pole Creek for $50— the same creek that runs through Snow Mountain Ranch property. By 1899, the couple had built a log home in the same spot and throughout the course of the following years, the pair had eight children. The Just family prided themselves on hard work and using the fertile land and natural resources such as Pole Creek to establish a self-sustained ranch. Here, the family produced things like cottage cheese, butter, cream and eggs.

While the family worked hard, there was still a need for fun on the ranch. The Just kids cared for wounded animals, danced in their barn and even skied behind a horse in the winter time while their mother rode it.

Fast forward a few decades, and a need for fun on the land was still kept in mind. Since the summer of 1969, Snow Mountain Ranch has had an extensive history rooted in good times and good people all while serving the mission of the YMCA on the same property where the Just family once had their thriving ranch.

In the winter, Snow Mountain Ranch thrives as a snow sports playground with activities like Nordic skiing, open-air ice skating and even dog sledding to name a few.

This weekend the Ranch is hosting the 35th Annual Snow Mountain Stampede, the highest Nordic Marathon in the country as well as the only opportunity for Nordic racers to ski 50K of skate style one day and 50k of Classic the next.  Most people think a marathon is more than enough but can you imagine back to back marathons! Only a handful of people receive the coveted BOSS 100K belt buckle each year for finishing both Classic and freestyle races.

Along with this weekend Stampede races, the Ranch is hosting a 50th anniversary winter celebration which will be jam-packed with fun. Participate in either of the nordic races in the morning, take a guided snowshoe hike to the Rowley Homestead, play trivia, make friends with other guests, staff and alumni. And be sure to wear your best ski sweater for the ski sweater contest on Saturday night at the Winter Guest and Alumni Celebration in  the Adam’s Promise Building.  For a complete listing of events and schedule visit Snow Mountain Ranch.org