What started as a temporary, seasonal position with UPS almost 36 years ago turned into a career path for Mater-James. A Kremmling native, she signed on to help with Christmas deliveries in December 1982, and, shortly after the holidays were over, accepted another temporary assignment to drive a route in Georgetown. “I’d never driven a delivery truck before, so this was all new to me”, said Mater-James. On April 13, 1983, she signed on permanently with UPS and has gotten “a lot of windshield time” since then, with routes across Grand, Eagle and Summit counties. “It’s hard work, but I love being outside and this allowed me to do that.”

Mater-James took over the full-time route out of the Granby satellite location about ten years ago. Since then, her normal day starts at 9:45 am, where she meets the UPS transport from Silverthorne, unloads her route’s packages on to her truck and begins her day. Mater-James said she averages about 200 packages (weighing in at close to a ton) and 100 stops a day. Her route usually ends around 7 pm (often later). While she’s never measured actual steps taken in a day, she once recorded over 6 miles walked during a route “on an average day”.

“I love the people and I love the job. I feel like I have grown up and grown old with many of my customers, and have become family with some of them”, said Mater-James, laughing, “my biggest fan base is under ten years old, or, they have four legs”.

One thing Mater-James has found to be most important to her, as a UPS driver, is respect for wildlife. “I have seen every kind of animal on the road including bears, mountain lions, deer, elk and moose”. Fortunately, she has never hit one while on her route.

Once, while delivering to a ranch just outside Granby, she saw some raspberries along the route and decided to stop and pick some on her way out. “I looked for bears, but didn’t see any, so I got out and picked some raspberries. While eating the berries, I heard what sounded like a throat clearing, so I backed calmly in to my truck, closed the door and saw, just a few feet away, there was a young bull moose staring at me. That could have been disastrous.”

“My customers are terrific”, said Mater-Jones. “I have always given out my phone number to those who asked. They will call to let me know when they’ll be out of town, if there’s a moose or other wildlife in the neighborhood, and, once, a mountain lion and her three cubs on a customer’s front porch! They take good care of me, and I know, if I ever got stuck, they would be there to help me out.”

When she’s not driving and delivering packages, Ronnie enjoys being outdoors. She has a horse, which she no longer rides and keeps more as a pet, along with some chickens, which are “cheap entertainment” she joked. She also enjoys gardening, 4-wheeling and looks forward to spending more time with friends and family.

After retiring, Mater-James plans to look for a part-time job. “I don’t want to stop working entirely, so we’ll see what comes up”.

Wherever Ronnie goes from here, it is certain she’ll put forth her normal 110% and we wish her well in her future endeavors. 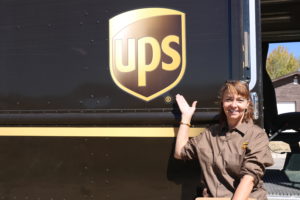 The men and women in Brown

We all know the familiar UPS driver, clad in brown (and shorts, even when the weather may not call for it), always smiling, easily engaged in conversation, and, a mainstay of our community. Across Grand County, we have come to know our dedicated delivery drivers quite well, since most of them have been on the job and the same route for a number of years.

Like Mater-James, these drivers make between 50-150 stops, distributing over a ton of packages on their routes every day. The average weight of a package is 14 lbs, but every day and every stop differs. “The job is very physical”, UPS driver, Mark Amundson, stated, adding, “it takes incredible endurance and stamina, often in adverse conditions”. Amundson estimates that about 75% of Grand County receives packages via their UPS driver, which lends itself to creating “personal relationships” between the UPS driver and the households and businesses along their route.

During the holiday season, the volume of packages increases significantly. This year, UPS is hiring 100,000 seasonal employees to support the anticipated increase in volume. On an average day, UPS handles 15.8 million packages. However, on December 20th, UPS’ busiest day, they’ll deliver over 28 million!

As we approach the holiday season, be sure to thank your delivery drivers, whether UPS or FedEx, as well as the staff at the Post Office. Through rain and snow and sleet and hail, they all work toward a common goal of delivering your packages and mail as timely and efficiently as possible.