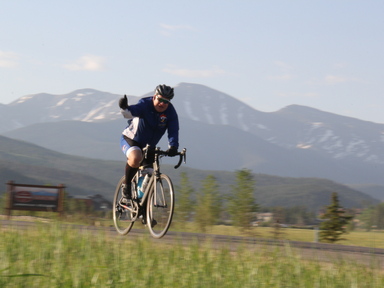 The 2018 Ride the Rockies careened into the town of Grand Lake Wednesday, June 13th. Coming off a 94.3 mile leg from Steamboat Springs, up and over Rabbit Ears Pass, the riders stayed overnight in Grand Lake. This was the longest stretch of their entire 418 mile journey.

This year, approximately 2000 riders from across all fifty states and the globe travelled to the gorgeous stretching valleys and steep mountains to tour the Colorado countryside on cycle.

Beginning back in 1986, the Denver Post began this event to showcase mountain passes and over 300-plus miles of the state in an impressive demonstration of fitness. Since then, the race has skyrocketed in popularity, and different routes have been chosen for riders adventurous enough to take on this endeavor. Since then, this six-day tour has transformed into not only an unforgettable experience for the riders, but also for the towns and counties that host the race. This year, three of the six days will showcase Grand County.

Back in 2014, Ride the Rockies climbed up Berthoud Pass from Denver, the voyage supposedly dropping the riders down into Winter Park  and Fraser at the Grand Park Community Recreation Center. However, this race went down in the record books as particularly challenging. As if the insane climb up Berthoud wasn’t enough, shockingly cold temperatures, freezing rain, and then snow derailed the race entirely. Conditions became so bad that riders were stopped at the 75th mile marker and shuttled down the rest of the way to Winter Park. 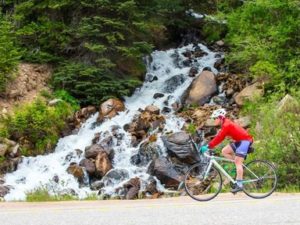 Because of such an occurrence, the ride over Berthoud Pass back in 2014 has been remembered as one of the most tough stretches the riders have ever had to endure. Equally so, the name Winter Park became attached to this harrowing story. This makes this year’s route that much more significant as Grand County gets a second chance to show the riders all its beauty and breathtaking views sans dismal weather conditions.

On Wednesday, after pedaling up ten thousand feet to the summit of Rabbit Ears, the riders got to maintain that impressive elevation for miles. Then, they dropped back down into Grand County, known as the Mountain Bike Capital of Colorado.

Many noted that the weather was a bit hot , especially when passing through the  Kremmling flats on their way to Grand Lake, but every single one of the riders raved over the beauty of Grand County, one rider in particular mentioning “this is a beautiful place for someone to grow up in”. Even with an inspiring 94.3 miles backing them, the riders walked the streets of Grand Lake Wednesday afternoon hardly sporting fatigue. 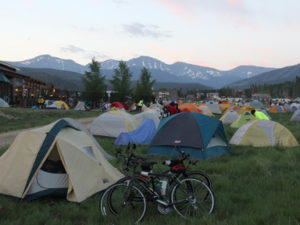 Beginning Thursday, the Fraser Valley Metropolitan Recreation Center awaited the riders, as this was the headquarters for the riders during their second night in the county. As the day wore on, a tent civilization sprung up in the meadows behind the Rec Center and the north-west section of the parking lot transformed into storage for the bikes. Stacked in standing rows, the sight of the shear number of bikes highlighted to everyone passing by on Highway 40 just what kind of a grand event this was.

Four years after Ride the Rockies riders were shuttled into Grand County, this iconic race and the bikers endeavoring on it returned; this time around, there was no snow, no freezing rain, and no torrential winds. This past Wednesday and Thursday held sunshine weather that welcomed the riders as warmly as this community did.