One Nautical mile at a time with WE I SAIL 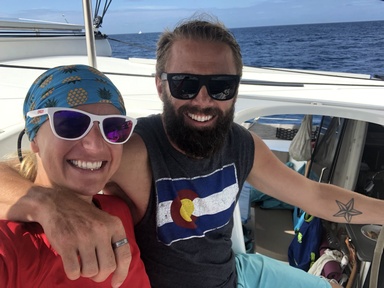 Want to shake up the way you live your life? Here’s the story of a couple of Middle Park High School graduates that staged and managed a major life change – and have set sail on more than just a dream, they have created a lifestyle around their passion for exploration and adventure. 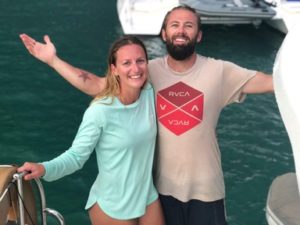 Warren Cook and Erica Thomas grew up in Grand County living the mountain lifestyle. The Cook family are local ranchers and Erica is the daughter of Jacques Thomas (LeFeet Lab in Winter Park) and April Hilton. After graduating from MPHS, Warren started and built a very successful construction business and eventually moved the business to the growing Denver market. Erica graduated several years after Warren and decided to travel the world, igniting a passion for travel and adventure outside Grand County, Colorado USA.

I sat down with Erica for coffee and an update on their new life together and was inspired and intrigued by the risk and rewards of their passion for adventure.

“We have made a few BIG changes in our lives, many would say, crazy! WE say, ‘If not now, then when?’ In the last couple years we saved up and prepared for a life transition from the mountains to the sea. We sold all of our belongings, finished our first home, said our ‘I Do’s’, and packed the remaining things we owned into our truck, where we lived for a couple months, crossing the country to the East Coast. Last year we bought a boat and started part 2 of our new life journey… to move and live on our new sailboat!”

The couple were working, living and playing in the front range of Colorado. “We were living our best lives to the fullest, or so we thought.” Warren had a successful construction business and Erica had just started a new career that she was really excited about and they suddenly realized they wanted something more. Erica said, “Life happens in chapters. Just because you start your career path heading in one direction doesn’t mean you can’t change and follow your passion or dreams.”

Erica and Warren traded their life on the mainland for a life on the sea. Renting out their home in the city, they purchased a 2014 Fountaine Pajot 41’ french sailboat with a 22’ beam. “The lifestyle is much like tiny home living.” Erica said the boat had one owner and it is “really nice”. There were plenty of things the previous owner tricked out. “We feel really lucky.” Typically cats of this size and appointments run from $330k-$500k. The boat has 2 diesel engines when you need to drive instead of sail and is completely outfitted to be self contained. “We wanted to be off the grid and self sufficient.” Erica said Warren is really handy and learned a ton growing up on the ranch and building homes for a living so he can handle just about everything they need for day to day life at sea.

A typical day in the life of a sailing couple is always different and can be quite challenging. “Mother earth makes the rules and it is not for everybody.” The weather dictates what you can do on a sailboat on a daily basis.

Warren’s father was a pilot, flying in and out of Grand County airports, and had to study the weather closely, so Warren was exposed to those hazards early in life. “We are not meteorologists and we have punched through some scary moments.” Erica explained many of the lessons they have learned in the last year could only be learned once they moved onto the boat and had to deal with it in the moment. “It has been over a year and I still can’t believe we really did it. It was scary at first but we love it!”

“We learn more from one sail to the next. We study the weather and have learned to read the  clouds.” Reading the clouds like the early sailors is a huge skill to possess on the open sea. Nowadays, there is an array of resources to draw from “when you are connected”, but the couple is not always digitally in range. “There is so much great information out there. We make a daily plan and we decide what we want to do each and every day.” However, there are times that they have to rely on instinct and live in the moment. Erica said, “The Caribbean is great for sailing. There are so many holes that you can hide out and seek refuge from the storms. We quickly realized why so many pirates sailed the Caribbean waters.” Sometimes the couple will find a place and hunker down and wait for the storm to pass. 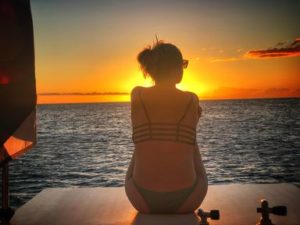 Erica says they couldn’t have asked for a better place to start. There is a huge community of sailors navigating the Caribbean, and the majority are willing to help. It is a network of like-minded individuals on a journey of life and exploration. “It is almost like a family.”

One of the challenges is sourcing food. “The grocery store is not always an option, so we stock up when we can.” Erica said the food thing was a hard transition, but you find you need a lot less. “Somehow it makes you feel more connected with your existence, once you realize you need very little to be happy.” She said, “I grew up a mountain girl and I brought 3 parkas with me, which was silly, but we have been able to trade for more useful items.”

Erica said they still have much to learn, but they are not really afraid of piracy. “There is a bit of fear factor everyday, but mainly the fears are weather related.” The Caribbean is fairly safe and there is a network of support a radio call away. “We misread some situations. There are great books out there about safe sailing and what to know and where to go.”

One of the scariest moments was a couple of miles off an island early in their adventure. They were being approached by a small boat with a couple of men in it. They soon realized they were being confronted by ‘Eastern Carribean Boat Boys’. “We thought we were in a bit of trouble, but quickly realized they were just trying to make a living off the sailors.” They come out to your boat, trying to help you find with things you might need or want. Sell you fresh fish, fruit and even go to the mainland and pick up supplies for you. Their lifestyle is to make money off the sailors. They want to help you. “All the extra items I packed have been very useful, because we use it to trade for stuff we need or want.”

“Once you give up the comforts of everyday life, the fear factor becomes real. The safety net of the mainland is of real concern at first, but you learn to adapt.” She adds, “you risk your life everyday driving Red Dirt hill.”

“I don’t miss the mountain life, I still love it but we wanted to do something new and different.” Warren’s dream, that started years ago with a love for the ocean, has turned into their reality and they love it. There is a big draw to come back to Grand County someday. “Before the boat, we were thinking we might come back and build a home in the area, but who knows at this point, because there is so much out there. Ideas are just flowing out every day. We may even find a cool island and open an Eco Lodge of some sort, who knows?” 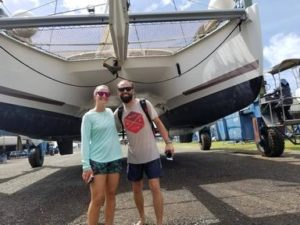 Erica said one of their goals in the next year or two is to sail the Panama Canal and cross the Pacific. Their lifestyle is portrayed as beautiful sunsets, cocktails and good times, but the weather can put you in your place fairly quickly. Erica said, “We are learning more everyday. We are eager to see the rest of the world.”

Warren and Erica document their experiences and journey with weekly video episodes and blogs of all their adventures. “We tend to turn the camera on when we are having fun but are trying to focus on coverage in all conditions.” If you want to have a look, follow them on social media or subscribe to their weekly video episodes. All the links and more information about their adventures can be found on their website. https://www.wesail.world/