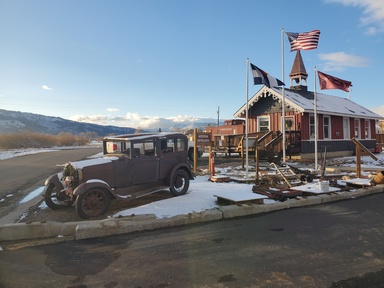 You owe it to yourself to stop by the Moffat Road Railroad Museum (MRRM) in Granby before they close the doors for the winter season January 9th. 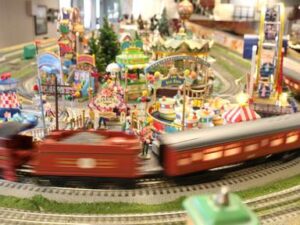 The museum staff and crew have brought the museum to life with new buildings, exhibits, a gift shop and all new landscaping. Of course the traditional Christmas Train exhibit is always a fun and exciting dioramic look at animated towns, roadways, ski lifts and trains of all shapes and sizes. The Model train exhibit is a 1000sq ft expansive layout filled with wonder and amusement for the whole family.

Dave Naples, the man behind the vision, said, “Our goal is to make the Moffat Road Railroad Museum a World Class attraction that our community can be proud of.”

The museum has 6-8 volunteers and a small paid staff with a long list of to-dos. Naples and his staff have been full steam ahead, laying the tracks for this project. “We have been able to invest in some of the final components and have made some headway. We are on track to complete the museum by 2022.”

One of the pieces the team finished this fall was the new Visitor Center that serves as the main entrance and gift shop. The new building is filled with history. It got its start at Magic Mountain in Golden, CO. The building was built in 1956 by a group of Denver businessmen, with the help of several veteran Hollywood art directors who worked on Disneyland. The group wanted to spread the Disneyland theme park ideas across the country when they decided on the Golden project.

“We kept it pretty much the same, but had to rebuild the bell tower,” said Naples, adding, “We wanted to preserve a piece of this history and it is a very nice building to preserve.”

Magic Mountain, better known as Heritage Park, was a Storybook Victorian theme park shopping village. The Moffat Road Railroad Museum visitor center building was the original funhouse at the park. The building was turned into a wedding Chapel by the Heritage Park developers in 1971. “It was a very popular place to get married and I heard more than 10,000 couples tied the knot in the building from 1971 to 2015”, Naples said. 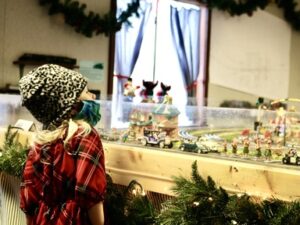 Dave picked up the building (literally) and brought it to Granby last year and renovated the entire structure, including the bell tower. The new Visitor Center is filled with Moffat Road artifacts and a tasteful little gift shop.

One of the exciting pieces Naples and his crew are bringing online next summer is the highly anticipated Moffat Road Railroad Museum Train Ride for kids and adults. “The engine is very powerful and will pull 5 loaded cars easily.”  The crew is hand building the 18” track around the museum grounds as soon as conditions permit, with hopes of offering rides as early as mid-summer.

The same company that builds trains for Disneyland is building the MRRM train. “Our train ride will have the distinction of being the highest train ride in the USA, at 8350’ elevation. The train is an 18 inch gauge replica of the Moffat steam locomotive with 5 cars and a caboose. It is a Steam Engine replica, but it is actually powered by a Kubota 3 cylinder diesel engine.” Naples said the train will be an experiential railroad attraction for kids and adults. The train will have a plow on the front, so they can operate in the summer and winter, in all conditions.

The crew is currently working on the restoration of the old passenger caboose. Museum visitors can climb aboard for a look as the work progresses. “We are hoping to finish by early summer,” said Naples. One of the first components acquired by the museum is the Denver and Salt Lake Railroad  #10300 Steam Derrick (crane). The museum crew built new stairs, so you can climb up and check out the view of a 19th Century workhorse. 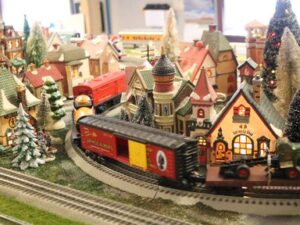 With so much work going on at the Moffat Road Railroad Museum, you owe it to yourself and your family to stop by before they close up the exhibit for the winter season. Naples said numbers have been way down this season and invites the community to come see what has been going on down by the tracks.