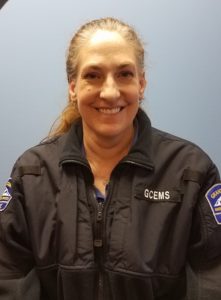 Grand County Emergency Medical Services, (GCEMS) is excited to announce that Jeanne Power, Nationally Registered Paramedic (NRP), has joined the GCEMS team as a new Education Captain in the Education and Training Division. Jeanne is a Colorado native who grew up in Steamboat Springs and has spent almost all of her life in Colorado. She played basketball and graduated from the University of Wyoming with a BS in Science and Science Education and went back to Steamboat to teach at the elementary school level. During her time teaching, she joined and volunteered with the Routt County Search and Rescue and in 1992 she borrowed $300 to take an EMT class at the community college. In 1993 she volunteered with the Steamboat Springs EMS service, received her Paramedic degree in 1999 and continued to volunteer with SAR until 2011.

In 1995, while teaching and volunteering with SAR and EMS, she became the first female firefighter for the Steamboat Fire service and was the sole female for twelve years. In 2001 when EMS and Fire merged, she was one of the first six career firefighters and had responsibilities such as Firefighter II, Paramedic, Fire Instructor I, Fire Proctor and the EMS Training Officer.

Jeanne moved from Steamboat Springs in 2011 to serve as the Ambulance Director at St. Vincent Hospital in Leadville. She then went on to work for Summit CO Ambulance Service as the Clinical Practice Supervisor and as a Paramedic. She started with GCEMS on March 20th as a Captain and will work in partnership with Captain Audrey Jennings, RN, NRP with the Education and Training Division. That Division is responsible for the EGHS EMS class, coordinating and teaching the community classes in Grand County, working with the EMT class over the summer, and provides continuing education courses for GCEMS staff and other responding agencies. “GCEMS is one of the most progressive EMS services in Colorado,” said Jeanne. “I’ve always been impressed with their initiative and am thrilled to be a part of it. I absolutely love Grand County and spent a better part of my childhood on Grand Lake.”

“Grand County EMS is thrilled to have Jeanne join our team and continue to provide the outstanding, professional care that our community deserves,” said Ray Jennings, EMS Chief. “The experience that she has will add greatly to our team and I am excited to see what her futures holds here in Grand County.”

Jeanne has an older and younger sister, three nieces and a nephew, and her only child is a Labrador retriever named Daisy who loves to go with her on hikes, biking runs, tele skiing and playing in the snow. Please help us as we welcome Jeanne to Grand County EMS.