On Wednesday, June 19th, a new life size Bronze statue of Jack Kerouac will be unveiled at the Distillery in Fraser. It’s only fitting that the statue of Kerouac makes its first appearance shortly after the 75th anniversary of D-Day because Kerouac’s post-World War II novel, ON THE ROAD, is often seen as one of the defining books that introduced the Counterculture of the 1960s. It’s listed as one of the top 100 novels of the 20th century.

Jack Kerouac is being brought back to life by Howard Neville, a Grand County artist, sculpture and resident. Howard is known for other Bronze works, especially the Bronze statue of Dwight Eisenhower located at the Lion’s childrens fishing pond along Route 40 and near Safeway in Fraser. The Eisenhower Bronze weighs 500 pounds and is 1½ life size. He has other well-known works including the Boy Reading to Dog Sculpture in Grand Lake.

In the Winter Park Times June 21st edition, you can read about the unveiling and more about Jack Kerouac and his influence on America’s transition into the counterculture trends of the 1960s. To better appreciate Howard’s Bronze work, please allow me to share with you a bit about how all this even came about and why this Bronze of Jack Kerouac is just another example of the talent, history and richness of the community that lives in Grand County.

If you’ve read any of my columns, you know that people’s passions always interest me, especially in the artistic world. So, I called Howard last week to learn about how this project got started and to better understand, now that it’s nearly complete, what he hopes the Kerouac Bronze will say to viewers.

Howard’s interest in Kerouac started when he young. His uncle was a Kerouac fan and often talked about him. Many years later, Howard met several friends that would randomly bring Kerouac up, reminding Howard of his uncle and sparking his interest in doing a Kerouac Bronze. As Howard’s interest grew, he remembered that Kerouac traveled Highway 40 most often between the coasts. Grand County’s piece of Highway 40 was remembered by Kerouac including Berthoud Pass and Kremmling.

Creativity can be a mysterious process and individual to each of us. For Howard the confluence of an uncle’s words, old friends’ memories and Highway 40 (a road Howard travels most days) produced a vision that we will all see June 19th. It was a vision he was determined to share with others.

Bringing a vision to life requires a lot of skill, work and a multi-step process. First a clay statue is created followed by a rubber model, then wax model, and a ceramic shell over the wax (the wax then melts out). The last step is to pore the Bronze into the ceramic shell. This is a process I’ve never seen but that sounds very similar to my experiences in printing a newspaper (which I can explain in annoying detail). The biggest difference is that a newspaper is printed every 24 hours whereas Howard’s masterpieces can take months and even years.

To Howard’s enormous credit, he’s worked hard to share his process with everyone and give us all a view into the many phases, from concept to design, modeling and finishing. Pictures of many of these steps can be seen on Howard’s Facebook page.

After unveiling the life-size, 230-pound Jack Kerouac Bronze on June 19th, Howard will also be making available miniature statues to interested parties. He plans to limit the miniatures to just 47, the age Jack Kerouac died. He has already sold a few including one to Barry and Debbie Young, owners of the Fraser Distillery. Currently the life size Bronze will be at the Distillery for only a week, but the miniature will be living there forever courtesy of Barry and Debbie. Barry said that they were awestruck when they first saw the life size Clay model at Howard’s studio and just had to buy the miniature for their own enjoyment as well as the Distillery’s customers. He also said it’s a great way to support the Grand County art community, with Howard being one of its most prominent members.

Come visit Jack Kerouac starting June 19th. He’ll be standing outside the Distillery alongside Highway 40 just as he did so many years ago. 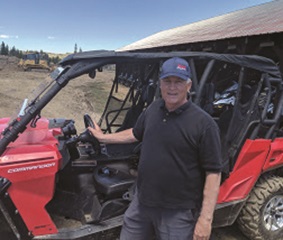 Please send any comments to bebarwick@gmail.com.