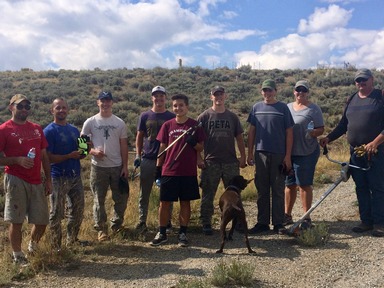 Photo: SAGE ADVISORS — Together, Aric Kloss, Brian Stuart, Joe Kloss, Gabe Loberg, Connor Life, Dylan Kloss, and Rowan, Sandy and Brad White helped spruce up the Hot Sulphur Springs Cemetery, including trimming lots of sage from the hillside. Dylan said the Eagle Scout project taught him a lot about his “town’s history and the people in it.” Amongst the hillside brush lay famous ski athletes Barney McLean, Carl Howelsen, and Horace Button. The oldest stone there is dated 1878, and there are said to be more than a dozen unknowns. (Photo by Michelle Kloss)

A Court of Honor Sunday, June 2 pays tribute to local twins Dylan and Joe Kloss, who received their Eagle Scout award May 14. The community is invited to attend the ceremony, scheduled 4-6 pm at Church of Eternal Hills in Tabernash.

Each young man came up with a community project, designed it on their own, and gained help along the way from fellow Boy Scouts, sponsor businesses / benefactors, neighbors, and friends. 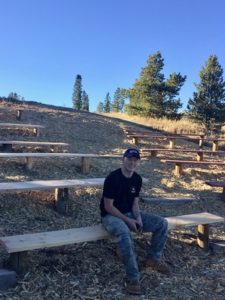 “Joe and his team worked hard to improve our Indian Peaks Fire Ring,” said Mary Ann Degginger, program director at YMCA of the Rockies, Snow Mountain Ranch. Joe fixed a broken cross, installed new benches, and renovated the outdoor chapel and fire pit area (bench seats were donated by Big Valley Construction). He chose the area, he said, because it needed a lot of care, and was used by the community a lot. “Snow Mountain Ranch loved the opportunity to partner with him and our Boy Scout troop,” Degginger said.

Dylan focused on rejuvenating the Hot Sulphur Springs Cemetery as his Eagle project (a five-acre tract donated by homesteader, blacksmith, and one-time sheriff Solomon Jones in 1892).  He thinned out sagebrush and straightened headstones with fellow Scout members, his wrestling coach, and sports teammates. The project taught him a lot about Hot Sulphur’s history “and the people who lived in it.” He also designed and installed a new sign for the historical site after studies in NDesign and Illustrator in school, and guidance from Vanessa Steifel of Triple V Designs.

“They did a beautiful job,” said longtime HSS resident and chamber director Yvonne Knox. She’s been on the HSS Cemetery Association board for 20-plus years and hopes the work Dylan put into the area will inspire a new generation interested in serving on the board. (Info.: (970) 725-3374, leave a message).

The brothers are third-generation Eagle Scouts (dad Aric is also an Eagle Scout and served as Scout Master for Troop 104; his dad Richard is also an Eagle Scout).  “Boy Scouts has been one of the highlights of my life,” Dylan said. “I am glad that my parents emphasized the importance of seeing it through.” Joe agrees: “Scouting has been one of the best parts of my life and even influenced me to be a SERE specialist in the Air Force.”

Aric and his wife Michelle couldn’t feel more blessed when it comes to their sons. “I am obviously beyond proud to be able to call Dylan and Joe my sons,” Aric said. “They are fantastic young men from a solid Grand County upbringing … I’m very excited for them to open the next chapter.” Aric’s father, Richard, is “absolutely beside himself,” Aric said, “about having three generations of Eagles in the family.”

Eagle Scout is the highest rank, with only 3-4-percent attaining it through Scout spirit, leadership, and service.  Troop 104 has eight other Scouts, five of them one step away from the Eagle Scout distinction. So far under Aric’s tenure, he’s had five make it. “If I have anything to say about it, the rest certainly will too.”

Seniors at Middle Park High School, they graduate June 1 and leave the nest shortly after. Joe takes wing with the U.S. Air Force June 4 as a SERE specialist (Survival, Evasion, Resistance, Escape) teaching aircrew wilderness survival techniques and training for POW situations; Dylan is submerging himself into the U.S. Army Aug. 12 to be a deep-sea diver doing underwater welding and salvage. Both receive immediate promotions, starting military life a couple ranks higher because of their Eagle Scout status.