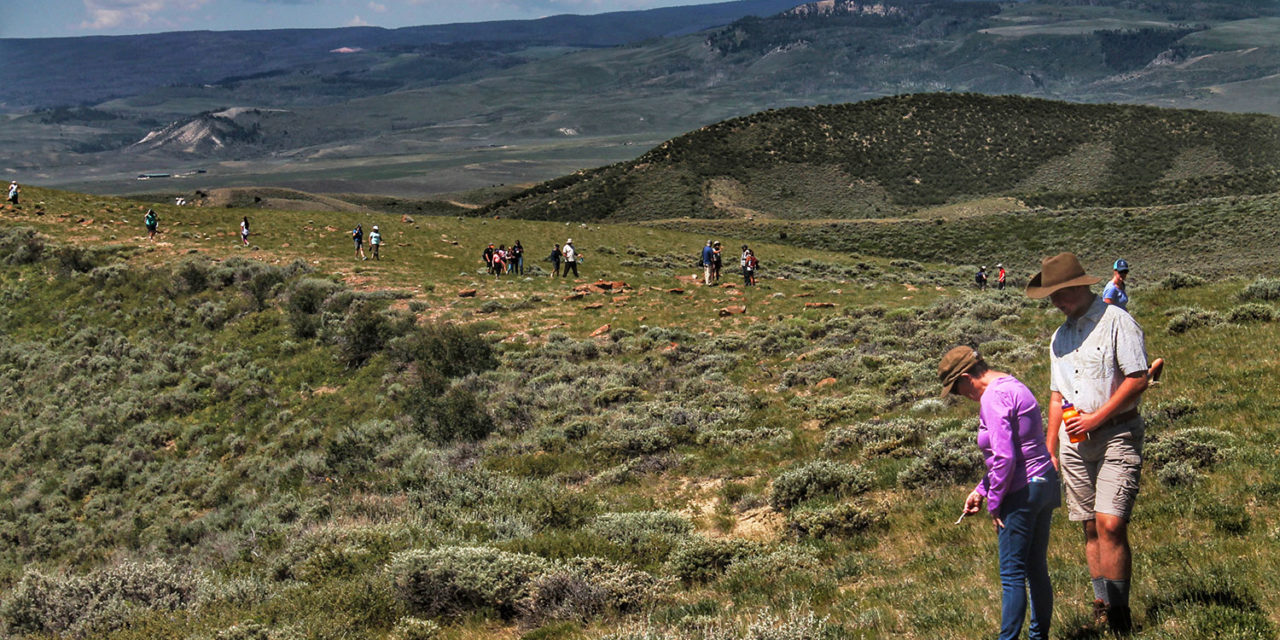 Over two dozen explorers joined Heidi McNinch of the Grand County Library District and guides from the Bureau of Land Management for a hike to Kremmling’s 72.5 million year old fossil ridge, the Kremmling Cretaceous Ammonite Locality. Photos by Marissa Lorenz

When hiking above West Grand’s Town of Kremmling, gazing across the sagebrush covered landscape and arid steppe-like topography, it can be hard to believe that the area was once submerged by a great inland sea, the Western Interior Seaway, which stretched from the Arctic Circle to the Gulf of Mexico some 100 million years ago. And yet, it’s evidence was recently seen by a group of Grand County Library explorers, who had the opportunity to examine, touch, and search for Cretaceous-age fossils at the world’s largest Giant Ammonite find, the Kremmling Cretaceous Ammonite Locality.

Over two dozen hikers met at the Ammonite Site trailhead for an introduction to the area’s natural history by Bill Wyatt, staff archaeologist, “dubbed paleontologist,” from the Kremmling Field Office of the Bureau of Land Management (BLM). According to Wyatt, the high ridges were once 300 to 500 feet under water and were a theorized mating site for ancient sea creatures. Most of these were invertebrates, soft-bodied creatures protected by a hard outer shell, like the giant ammonites (Placenticeras meeki), whose shell could reach a diameter of 3 feet and whose long tentacles would trail behind them. It is currently believed that they may have been “similar in behavior to today’s salmon,” returning to designated breeding areas year after year to spawn, only for the adults to die and a new life-cycle to begin.

The shells of the cetaceans would have fallen to the bottom of the waterway, becoming lodged in the mud, which, through the chemical process of decomposition, would harden like cement, fossilizing the invertebrates and creating solid casings of their shells. Millions of years later, the ocean floor would be raised up and exposed with the uplift of the Rocky Mountains. Today, only the top layer of fossils and casts can be seen, though it is believed that many more treasures lay below, protected for future generations to marvel over.

At the recent Library-sponsored event, hikers were excited by the prehistoric cache right here in Grand County. 12-year-old Lily Krahulik and several other family members just happened to be visiting from Lyman, Nebraska when they saw the hike listed on visitgrandcounty.com. “It is cool to see all the different shells and ammonites,” Lily said. 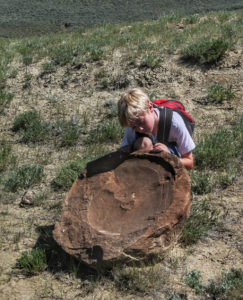 James Swan of Granby marvels at the casing of a giant ammonite fossil, depicting the enormity of a female who may have just completed her breeding cycle millions of years ago.

“It was amazing that they were so big and so many,” echoed Kenneth Hoffmeister, an 8th grader at Middle Park High School. His mother, Wendy, expressed surprise and satisfaction, saying, “I’m impressed with the knowledge of the BLM staff. They answered all of my questions, even the obscure ones. And I really want to thank the Library District for the opportunity to come here.”

The Ammonite Site is administered by the BLM and is open to the public year round, where, after a brief hike, anyone can look for ammonites and other now-extinct sea animals, such as baculites, bivalves, gastropods, and mollusks. However, it has been a protected site since the 1980’s in order to prevent the unauthorized taking of fossils and artifacts from the area and to allow for organized scientific study. Wyatt and his colleagues Marybeth Pecott and John Monkouski stressed the importance of Leave-No-Trace principles at the site, such as not leaving any trash behind and not taking anything found at the site. While it is illegal to take any cultural artifacts, like arrowheads, nails, or tin cans, from federal lands, the main site has an added protection, prohibiting the collection of natural souvenirs also.

“I encourage you to pick things up, study them, examine them,” instructed Wyatt, “but put them back where you found them so that others can have a similar experience. An object loses its meaning, loses its context, once it is removed.” Invertebrate fossils (but not fish or dinosaur fossils) can be hunted and collected at nearby locations, but Wyatt urges thoughtfulness even there. He advised that participants hunt and pick, returning a fossil if a better one is found and only taking one for each person. “That way, others can find something in the future.”

The Kremmling Cretaceous Ammonite Locality is a true jewel among the many adventures in Grand County and can be accessed after just a short ( somewhat rugged) 13-mile drive north of Kremmling. As with any field trip in the mountains, be sure to wear sturdy shoes and have water, a jacket, bug repellant and sunscreen in your day pack. To pick up literature and get directions, road conditions and parking information, visit the BLM office on Highway 40 in Kremmling or call 970-724-3000. To register for more outdoor summer excursions with the Grand County Library District, visit gcld.org/events.