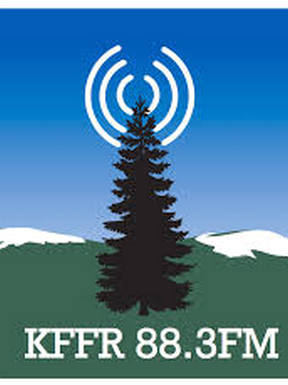 Up and down the radio dial, most stations are owned by highly-consolidated media organizations – many suggest that it’s just seven corporations (CBS, Clear Channel, Comcast, Disney, News Corp, Time Warner, Viacom) that direct most of the public media we consume every day. Talk about ultimate control of content and discourse! At KFFR 88.3 FM in Fraser, DJs shape the tone of their shows independently around the loose guidelines of providing sounds that are more like unique gems than overplayed sameness that exists on other stations.

The internet provides vast means in which you can entertain your ears, most of which, at their root, are computer programs. When human beings program a show to share on the airwaves, the idea is that a warmth and personality is communicated with awareness of our communities’ nuances that the automated mechanisms cannot provide. That is one definition of community. At KFFR the goal is to make sure they’re filling a unique niche in music and local-interest programming that is refreshing, engaging, and helps expand our listeners perspective.

With the landlocked reality of our physical location on the planet, a person could go a long time without coming in contact with things that present a different perspective than they’re used to, or hear an honest discussion about the community, our natural environment, or hear songs they’ve never heard before, maybe even catch a live performance from local musicians. And considering media consolidation – you can hear the same song on lots of channels played all day long. Many DJs, on those stations, don’t even officially host a show. They record their vocals ahead of time, send files to the station, and a computer automates the pieces.

KFFR 88.3 FM is a refreshing addition to our growing community and has built a team of dedicated volunteers through the grassroots efforts initially envisioned by owner and founder, Dennis Moynihan.

“It takes a great deal of volunteer support and community support to sustain a viable grassroot media entity,” said Steve Skinner, Chief at KFFR. “In today’s glut of corporate media outlets, organizations like KFFR struggle to keep the lights on. If you want things unique to the community it is important to contribute time, resources and/or money.”

After three moves, KFFR is now in its permanent location above Julio’s in Murdoch’s Plaza. “It has been quite the road and taken a village to make it happen, but we are excited to finally have a permanent home.” Skinner said the radio station could not survive without community support and fundraising efforts like the upcoming fall membership drive. This is the radio stations second membership drive.  The first drive raised over $16,000. The Fraser Valley Lions Club just donated $3500 in critical backup infrastructure.

The fall membership drive is slated to run from October 17th – 31st with a kickoff party being coined as “The Fraser Mash Bash” on Thursday, October 17, 4-7 pm. Steve Skinner has rewritten a lyrical version of the Monster Mash and dubbed the new version of the popular tune, “The Fraser Mash”.  The event will feature live music from locals Andy Straus, Peggy Mann, Mike Turner, Joe Rooyakkers and Steve Skinner on the brand new stage in the KFFR studio. There will be facepainting from Kristin Olson, limited edition Fraser Mash T-shirts for all KFFR donors, pizza and beverages. Volunteers will be filming scenes and outtakes for the Fraser Mash music video that will be released sometime next year. Skinner said, “This is going to be a great event and thank you to all of our supporters. Come get your face on the film!”

KFFR announcers are all-volunteers passionate about music and broadcasting. KFFR is broadcasting at 88.3FM and streaming worldwide at KFFR.org  There are many ways to volunteer or contribute. For more information, visit the station at KFFR.org. See you for the Fraser Mash Bash!