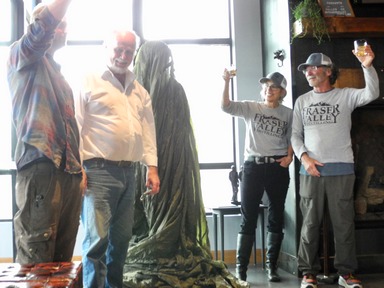 On Wednesday evening, the new, full-size bronze statue of Jack Kerouac was unveiled at Fraser’s Distillery. The bronze stands 5 feet 9 inches tall and weighs 230 pounds. It will be at the Distillery for 5 days (until Monday the 24th) at which time it will travel to other cities and towns. Its final home has yet to be determined.

The artist, Howard Neville of Grand County, unveiled the Kerouac artwork to an enthusiastic crowd inside the Distillery and in sight of Highway 40, a road Kerouac traveled often on his trips between the east and west coasts. Neville told the crowd that he’s been interested in Kerouac for many years, starting with stories told by his uncle when he was young. Neville’s work depicts Kerouac in his prime, with his famous scroll in hand, and offers the viewer a peek into this man and into a transformational period of our country’s history.

Kerouac is best known for his book, On the Road, published in 1957 and one of the defining books that introduced the Counterculture of the 1960’s.

The owner of the Distillery, Barry Young, said he is honored to be the statue’s first stop. He was able to visit Neville’s Grand County studio and see the statue in its clay form. Young said he was awestruck when first seeing the life-size statue and subsequently purchased a miniature statue to show at the Distillery. 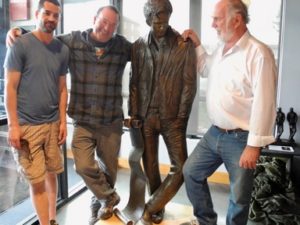 The turnout to see the unveiling was impressive and very interested in both the statue and in meeting the artist, Howard Neville. Surprisingly, two of the attendees are related to Jack Kerouac. Guy Kerouac and his son Glenn are both residents of Winter Park/Fraser and were surprised to learn about the statue. Both attended the ceremony to see the statue and meet the artist. All three Kerouacs (yes, I’m including the statue) and Howard posed for more than a few pictures. It can be a small world.

The Jack Kerouac statue is open to the public and can be viewed at the Distillery in Fraser. The bronze statue is located just inside the front door. The Distillery is open between 4 pm and 9 pm, Friday through Saturday and from 12:30 to 5 pm on Sunday. Have a drink with Jack and enjoy this excellent piece of art, and Highway 40 history. For those of you who just want to see the statue, the Distillery is opening its doors from noon to 4 pm on Friday and Saturday. If you want, they will also be offering tours of the Distillery (but no food or beverages during those special hours).