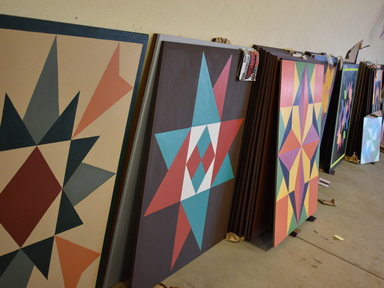 Beginning last spring, popping up on businesses and aesthetic locations throughout Grand County were squares of art representing quilting patterns. In the beginning, these designs decorating the architecture were few and far between.

Today, a year later, a drive across the county showcases numerous of these quilting squares hung on restaurants, shopping centers, and community buildings. Each square of painted quilt art serves a place along Grand County’s own quilt trail.

A quilt trail has become nationally known as a series of art pieces that resemble quilting patterns. These are called quilt blocks. These blocks are then hung on locations throughout a county, showcasing varying locals of that county. Then, all the locations of the quilt blocks are compiled, creating an explorative tour that people can embark on to explore the county through a new imaginative perspective.

This quilt trail movement began back in 2001 in a rural town in Ohio. During the beginning stages of the movement, the quilting blocks were initially featured upon the sides of barns. Only twenty blocks were created and placed along a driving route that was friendly to visitors to travel along as they seek adventure along the countryside.

Since then the movement has grown exponentially, and now exists within counties of 47 states. Communities across the nation have taken to creating quilt blocks and placing them at locations they wish to showcase or highlight a work of art. Maps of these trails have been made, allowing locals and visitors alike to discover areas of the county through works of art.

The spring of 2017 marked Grand County’s emergence in the quilt trails movement. Local quilting group the Grand Quilters took the initiative. At the end of the summer of 2017, after hours of hard work and the dedication of numerous volunteers, 140 quilt blocks were designed, painted, and then bought to be hung on businesses and homes alike.

The profit of this endeavor very quickly shifted to a fundraiser for the Grand County Historical Association (GCHA). Kristi Martens, then Museum Director at Cozens Ranch said, “It became a mission for the organization and volunteers to seek out as many supporters possible to purchase the quilting blocks”.  Martens added, “In its infancy, we were super excited to be a part of something so fun and creative.”

In the early years leading up to the Grand County Quilt Trail movement, the Grand Quilters had showcased many of their actual quilts on the walls as art exhibits within Fraser’s Cozens Ranch Museum. This allowed museum visitors to become exposed to both the beauty of the art and the heritage of quilting that still stands strong within Grand County. The idea to fundraise for GCHA blossomed from this friendship.

However, whenever a quilt block is purchased, it is not only GCHA that benefits. Each business and public location that hangs a quilt block gains a piece of public artwork to showcase, and is then added to the officially named Grand Quilt Trail. Their location will be showcased within the Grand Quilt Trail brochure so that people can follow Grand County’s very own quilt trail.

Now two summers later, the project has almost reached its end. Quilting blocks are still being created. Betsy and Gary deVries, as well as LeAnne Becker, have headed the project this summer. They estimate the end of the project to fall around late August or early September, depending on when the final quilt blocks sell out.

The quilt blocks already hanging proudly throughout Winter Park, Fraser, Tabernash, Granby, Parshall, Hot Sulphur Springs, and Grand Lake have inspired this project to continue for its second summer, and the leaders of this project want to thank the participation of the whole community for taking the time to participate in the quilt trail with passion.

As the project begins its final push to completion, try and spot the featured blocks already sewing Grand County together.