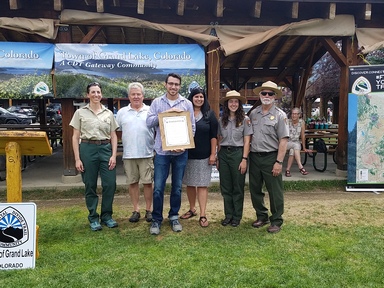 Recognizing Grand Lake’s proximity to the trail, which works its way right down Grand Avenue, Town Planner, Nate Scholl, submitted an application for the designation to the Continental Divide Trail Coalition in April and it was almost immediately approved. “We knew we’d be a good fit for this designation with our many recreational amenities and beautiful lake”, said Mayor Peterson.

Scholl explained, “The Continental Divide Trail is one of the ‘triple crowns’ of trails in North America”, the other two being the Pacific Crest Trail and the Appalachian Trail. The trail runs from the southern New Mexico border to the northern tip of Montana. Of the 3, the CDT is the highest trail and also considered the most remote. In summer months, thru-hikers can be seen traveling the trail through town daily, their large packs making them easy to identify.

Continental Divide Trail Coalition Executive Director, Teresa Martinez, said “This year, we celebrate” the 40th anniversary of the Continental Divide Trail, and the 50th anniversary of the trail system. “Grand Lake is an important, incredible landscape of the Rocky Mountain West”, said Martinez. “To be a community that connects us to you, building relationships, celebrating treasured landscapes and experiencing them” are all part of what it means to be a Gateway Community.

A number of CDT and Grand Lake stakeholders attended the celebration, many with booths exhibiting their agency information set-up in the Park. NPS Ranger, Reghan Tank, told the crowd that 36.6 miles of the Continental Divide Trail runs through Rocky Mountain National Park. “Our trail crews work summer and winter, mitigating fallen trees, repairing bridges and providing interpretation services” to travelers along the trail.

USFS Trail Administrator, Brenda Yankoviak, added “The CDT is both a local trail and national treasure. It is a long-distance trail, but it is also your backyard trail”. She said “Those that live close-by, hike and help are the lifeblood of the trail system”.

A birthday celebration for the CDT and lunch followed the ceremony in the Pavillion. “We couldn’t be more proud”, said Grand Lake Town Manager, Jim White.