A lot has happened at the Smith Eslick Cottage Court in Grand Lake! This unusual structure, thought to be the oldest original motor court in the region, is now completely restored to the way it was in the 1930s. This was accomplished in part with a generous grant from History Colorado – State Historical Fund, and lots of local donations.

The Cottage Court is listed on both the Colorado State Register of Historic Properties and the National Register of Historic Places. That surprises some people, as it is a humble, rustic building, but has a rare architecture and is closely identified with the advent of automobile tourism in Grand Lake and the greater West. 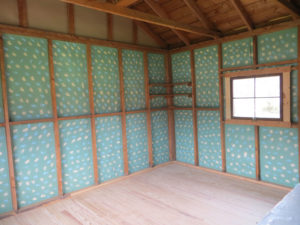 The interior of the 1915 unit of the Smith Eslick Cottage Court featured painted cardboard
insulation.

Built by Clyde Eslick and his father, Alfred, circa 1915, the Court has four small accommodation units with attached carports, all under one roof. Clyde was the grandson of P.H. Smith, an early construction entrepreneur who built several Victorian style hotels, the Grand Lake Yacht Club, and may other homes and buildings in the area. Smith’s children and grandchildren were encouraged to work in construction as well. Young Clyde and his father probably chose to build this Court because they treasured automobiles early on, and wanted to build a place for visitors to stay but also protect their precious cars.

The Court is constructed in the “Rocky Mountain Rustic” style common in Grand Lake, with half-round “barkie” siding and simple rolled roofing. Visitors had a wood burning stove, bed, drop-down table and chair in their accommodation. Not luxurious by today’s standards, but pretty comfortable after a long Model T ride on rough roads. With the restoration, two units have been kept in 1915 condition, including one with patterned cardboard wall coverings. 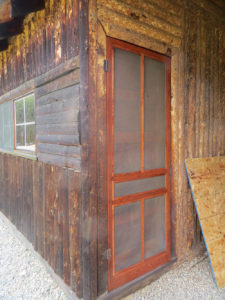 Two other units were updated by Clyde in the 1930s, probably when electricity came to Grand Lake, when he installed plywood on walls and “roughed in” simple closet spaces. Folks who remember staying in the Cottage Court always share how Clyde would have wood stacked for each unit, ready for heating or for cooking on the wood stove, and how he loved to sit and share stories with his guests while the kids played on the grass.

The Court has been restored. That means that every window frame, every bit of the unique wall coverings, flooring, everything is as it was. If something had to be replaced, it was done “in-kind” with materials chosen to duplicate what was used way back when. It has taken almost two years to make this happen, and we invite you to come take a look.

We’ll give tours of the structure at the Third Annual Community Chicken Dinner scheduled for Sunday, August 20th, beginning at 5:30 pm at the Cottage Camp site. Good tours, good food, music, campfire, vintage vehicles – all to celebrate and “welcome back” the Smith Eslick Cottage Court!