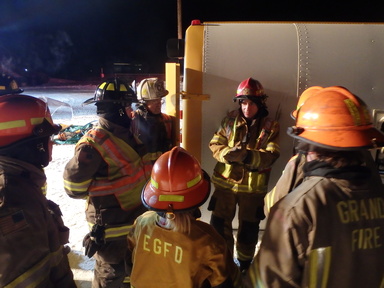 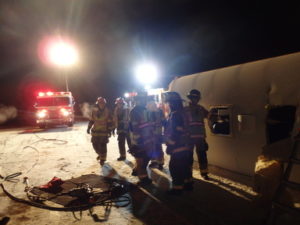 With temperatures in the single sub-digits Firefighters from around Grand County performed evacuation and extrication drills Tuesday night utilizing a retired East Grand School District school bus. Brad White, Grand Fire Assistant Chief, Operations / Training said, “It was cold but we have a dedicated crew and we layered up and went to work.” White added, “we try and plan county wide training throughout the year.” The crews come together and get to know each other a bit. “We work together from time to time and it really provides an additional platform of cooperation and familiarity with other crews.”

A school bus, soon to be on its way to the salvage yard, was rolled onto its side for the drills. Volunteer Firefighters practiced using built in emergency exits and made some new ones. As the crews found out – Colorado school buses are built tough to hold up to the extreme Colorado environment.

East Grand Fire District, Chief Holzwarth said, “Getting a bus from Mike Thompson is a perfect training tool for county wide crews to come together and run through some drills.”  The last bus was donated by First Transit Manager, Mike Fudge in 2015. “Many new volunteer firefighters don’t get this kind of hands-on training opportunity so the session played an invaluable role in their experience.” Holzwarth said, “Today’s buses are built tough!”

Thank you to Mike Thompson and Superintendent Reeves for this hands-on training opportunity.