Carlson’s presentation outlined his plan to build a good foundation for his new role. His plan illustrated four key components to a successful program entitled ‘P.E.E.R.’

Patrol includes being visible to the public, patrolling the community regularly, answering service calls and complaints;

Educate allows for healthy dialog between the town and residents;

Enforce means issuance of formal summons when code violations are discovered; and,

Resources gives Carlson and the town the opportunity to put residents in contact with various local resources to assist them with code compliance.

Carlson started his role as Code Enforcement Officer on July 30th and he has already read over the current Town Code, made notes on potential updates and revisions and also found a variety of local resources to help residents bring their properties into compliance.

He told the Trustees there are several local scrap metal facilities that will come to homes and take junk vehicles and some appliances. He’s also found a company in Denver that takes old tires at a cost of $3 apiece (where the cost averages $7 apiece locally). Front Runner Rubber Mulch shreds tires and uses them for playgrounds, landscaping, equestrian arenas and other products. However, they do not pick up, so he is looking into the possibility of collecting off-rim tires at a future Granby Clean-up Day and bringing them down to the front range by truck. The town would likely charge a fee to cover the cost for the tire and conveyance to Denver.

Carlson has already developed a Code Violation Notice form which lists the codes and regulations applicable to the violation and indicates whether the offender is required to comply within 30 days, 48 hours or immediate, based on the violation. He is also drafting a Complaint Form which can be utilized in case building. The form is designed to be submitted anonymously and will help to identify things he can’t see or possibly missed.

So far, he has identified approximately 53 junk, inoperative or unregistered vehicles on private property. He also commented on the Town’s noxious weed epidemic and hopes to get that under control as soon as possible. 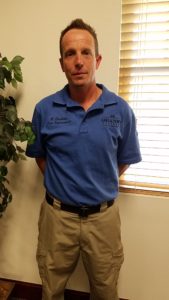 Carlson is also working with Grand County on bridging the gaps, between town and county code enforcement. This will help to resolve issues with Avenues A, B and C, Granby Jones Park and other county inholdings. Ideally, he’d like to work with the county on future specific code enforcement projects together.

His initial analysis of Granby’s Town Code brought forth several recommendations for review, including additional fishing codes and regulations at Kaibab Park, rules for recreational use, including biking, hiking and horseback riding on Granby Trails and River Run Ranch, and, recreation, trash, carving on trees, etc. in all other Town Parks. He said he was very glad to see the Town already does not allow drinking alcohol in public parks. “If we don’t have rules, people are going to do whatever they want. That’s going to be an issue”, said Carlson.

He’s also begun development of a Town Noxious weed program, in coordination with Grand County. He told the Board that he’d found a grant that the town may be eligible for to help with this project. Carlson told the Trustees “Right of ways and boulevards must be taken care of”.

Trustee Becky Johnson asked Carlson about the timing of the summons, noting that some codes indicate five or ten days to comply. The reasoning for the broader 30-day period will allow time for community education. The goal is to try to have a dialog first, so residents are not upset by the notices.

The Trustees also brought up concerns related to an acceptable number of unregistered or inoperable vehicles on a property. “Several houses have a number of vehicles/campers/boats that haven’t moved in years”, said Trustee Johnson.  Carlson told them that his job is to find the holes in the code and bring it up to better meet the town’s needs. While vehicle storage is a topic many long-time residents are not wanting to see changed, Town Attorney Scott Krob said “If the Board of Trustees elects to make changes, that gives Carlson the ability to enforce them”.

The Board and Carlson agreed that all contacts should be professional and in the spirit of cooperation. The Trustees also agreed to consider implementing a fund, similar to the Police Department’s Samaritan fund, to help financially challenged residents comply with the code. “Everybody benefits, and the neighbors will take notice”, said Trustee Johnson.

The Trustees asked Carlson “What’s the attitude been so far?”. He told them that most people wave. Carlson told them that one resident followed him and asked him what he was doing – she was very excited to hear the town had hired a Code Enforcement officer. He also said he’d gotten a few “stink eye” glares from residents as well. He’d just received his first email asking him to “get on the weed problem” and a few visitors had stopped by say hello and welcome.  “Overall, no threats or the bird yet”, Carlson joked.

The Trustees thanked him for ‘hitting the ground running’. “A self-starter is just what we needed”, said Mayor Chavoustie.