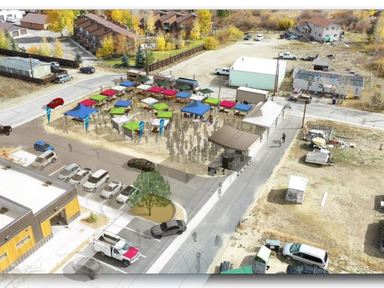 The Fraser Mountain Mural Festival will be held on July 26th and 27th on the building site of the Fraser Creative Center (“The Center”) in downtown Fraser. Krista Klancke created the design for the festival, which will sit in the proposed building’s footprint and occulus. The design includes a PAC tent for informational and administrative purposes, twenty artist booths with 8’ x 8’ panels the artists will use to create their murals, a section for porta-potties and handwashing, and a sound stage. There will also be several food vendors located on the perimeter.

The event will run from 9 am – 6 pm on Friday, and local radio station, KFFR 88.3 FM will be broadcasting live all day. On Saturday, the event will go from 9 am – 5 pm and there will be live music from 5 – 7 pm during judging followed by an awards ceremony. The Town anticipates about 500 people will visit the festival each day.

The murals will remain on display through August and will then be auctioned off at Fraser Valley Distilling on Labor Day weekend. Auction proceeds will be used to help fund the Fraser Creative Center, which is estimated to cost $6 million to construct.

PAC member, Ernie Roybal, described the event’s mission of bringing a diverse group of premier artists from the front range and western slope to the two-day festival, celebrating the community with an “explosion of colors”. Roybal told the trustees that letters had been sent out to artists, and the only concern was the short, four-month period before the event, which might cause some of the artists to decline. And, he added, “It’s one of the first steps of getting the Fraser Creative Center going”.

PAC member, Eric Vandernail, added, “there will be awards for the theme of local history, local preservation, transportation and outdoor life and also a People’s Choice award”. Vandernail also created a website for the Mural Festival. Interested artists, sponsors, vendors and volunteers should visit: frasermountainmuralfest.com.

Trustee Andy Miller stated, “In all the years I have been on the Board, we have been trying to get a unique event in Fraser, and I think this is it”. Miller added, “I’m really excited and think it is well worth funding”.

With little further discussion, the trustees approved the additional amount for the Mural Festival unanimously.