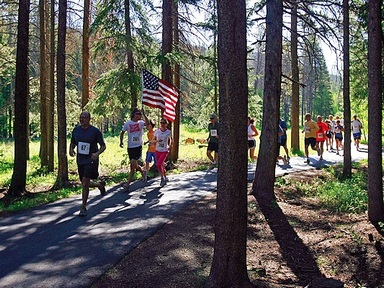 The Fraser River Trail is celebrating twenty five years of existence this summer. The project was a collaborative project between the towns of Winter Park and Fraser. The leaders at the time wanted easy access from the resort to Fraser with connecting points to amenities, trailheads and restaurants located along the corridor.

Growth throughout the Valley and a vision for connectivity beyond the highway pushed the idea forward and the towns secured A GoCo grant along with the matching funds to make the multimodal trail a reality in 1994.

Over the years, the trail has been resurfaced and extended into Granby thanks to the efforts of Headwaters Trails Alliance and a coalition of community volunteers.

Fourth of July will be a day of fun and celebration in Hideaway Park, the finish of the run. In honor of the twenty fifth anniversary, participants in the run will receive a commemorative T Shirt and Medal denoting the anniversary. The park will be filled with family fun games, live music and vendors celebrating the holiday in style.

Fireworks are planned for dusk thanks to ROAM and Rendezvous for sponsoring this years fireworks show. As always, the East Grand Fire Department will oversee the explosive display.