Fraser Icebox gets closer to an extended skating season 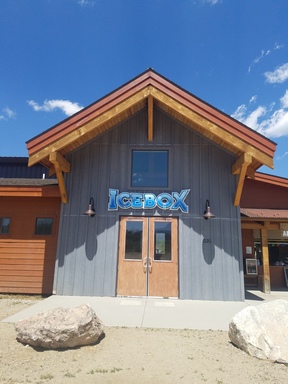 Fraser Valley Metropolitan Recreation District (FVMRD) has put a roof on the facility, laid the pipe and are finally bringing the refrigeration system online, in time for old man winter to come back around.

The new refrigeration project for the Icebox Ice Rink facility at the Fraser Valley Sports Complex is moving along as scheduled according to Director of Parks, Recreation & Golf, Scott Ledin. The three phase power is in place and the framing for the building addition that will house the refrigeration equipment is nearing completion, thanks to the coordinated efforts of numerous contractors, often volunteering materials and their time. 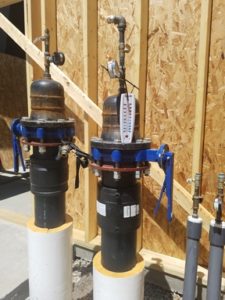 Ledin said, “The community has rallied around this project from the beginning and it is finally taking shape”, adding, “we are hoping to start making ice in October if everything goes as planned”.

The new facility project has a budget of approximately $700,000.  Ledin said, “Securing the additional funding has really been a grass roots community effort”.  The FVMRD initially committed $100,000 in 2016 to the project which leveraged several smaller grants to start the ball rolling. The town of Winter Park really set the stage by committing $90K to the project in 2017, and that, along with $25K from the town of Fraser and $35K from Grand County, Ledin said, allowed us to leverage those funds to bolster our DOLA (Colorado Department of Local Affairs) grant for $200K.

“The community leaders saw the economic impact potential of the facility and committed the dollars that made our DOLA grant strong”, said Ledin. That vision allowed the project to make the leap forward and bring the new system online this year.

One of the kickers, according to Ledin, were the volunteer efforts. “We have had more than $39,000 in volunteer time, contractor donations and supplies. Ledin added that before it is said and done, the number will top $50,000. “The community has really made it happen”.

Ledin also said, “It has been a moving target as many construction projects are, but we are on track and will come in very close to budget.”

The new refrigeration system for the facility will extend the season 8-12 weeks and create stable ice throughout the winter, even in the warmest periods.  Ledin said, “The system is designed to be able to provide solid ice twelve months a year, but the energy requirements for the summer season would be costly. “One day, the facility may have support for a year-round ice program but for now, the facility is scheduled to operate from mid-October through April. We would like to mirror the ski area season and maybe open a little early each fall, before the ski lifts start turning”, said Ledin.

The new compressor unit is the biggest question mark for the project’s completion date.  These types of systems are built to order, based on the facility requirements. Ledin said the company, Everything Ice, in partnership with Tolin Mechanical, are building the new unit from the ground up to meet the specs for the The Icebox facility.  If all goes as planned, the new unit should be installed and fired up just in time to drop the puck on the winter season”