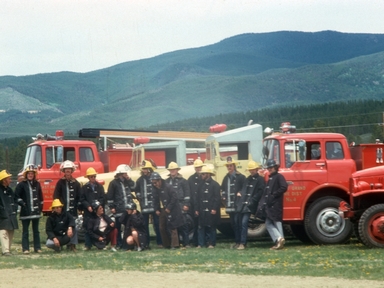 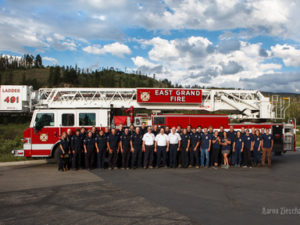 Over 50 years ago, the leadership of the Volunteer Fire Departments in Fraser, Hideaway Park, and Tabernash recognized the need to improve public fire protection in the Fraser Valley.  Bingo, bake sales and donations were clearly an inadequate source of funding and the need for a solid financial base was critical. Together the three Departments presented a plan to the Grand County Board of Commissioners to create a tax supported Fire Protection District. Following review by the District Court and a public election, the residents of the Fraser Valley approved creating the East Grand County Fire Protection District #4 (EGFPD).

East Grand Fire District Chief Holzwarth said, “It made sense to bring together all the volunteer departments and form one district.”  In the late 60’s money was very tight and the Board of Directors were forced to stretch every dollar. The District allowed them to leverage other funds and solidify the protection of a growing community. Holzwarth said of the initial departments, “They were pinching pennies so hard they squeaked when they walked.”

The first official Volunteer Chief was Clift Clayton and the district remained an all volunteer organization until 1980 when they decided they had the tax revenue to pay the district Chief an annual salary.

Today, EGFPD relies upon a group of more than 40 dedicated volunteer members, who are willing to commit the time necessary to cover the number of diverse emergency calls received each year. In fact, similar to the national average, the EGFPD is made up by 80% volunteers who respond to structure fires, automobile collisions, hazardous materials incidents, wildland fires, fire alarms, medical assists, and public assistance calls throughout the district. 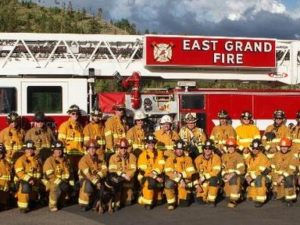 The first meeting of the Board of Directors of the newly formed District occurred on April 18th 1969.  In honor of that initial meeting the East Grand Fire District team has chosen the month of April as their official “birthday” and will commemorate the occasion at the regular Board of Directors meeting, April 24th 2019 at 7:00 PM.

The District is planning an open house the first part of August and will invite the public, Officials, former Firefighters and the Board of Directors to attend and help Volunteer Firefighters, Staff, Pensioners, and Directors of the East Grand Fire District observe the 50th Anniversary Year.

In appreciation of providing fire and emergency services to the community the towns and county officials are in the process of preparing proclamations in recognition of the EGFD service and for reaching a half century milestone.