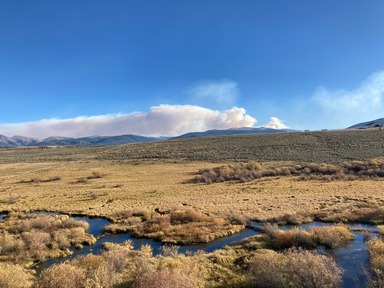 Photo: Smoke can been seen Thursday, October 1st southwest of Mt Nystrom on the flanks of the Fraser Valley. Picture taken from Coyote Creek in Tabernash, Colorado         Photo Jerry Nissen

The Williams Fork Fire, located seven miles southwest of Fraser, started near the Henderson Mill on August 14th and quickly grew due to high winds, steep slopes, and dense fuels.

Working with long term fire behavior analysts, foresters and other natural resource specialists, Williams Fork firefighters successfully contained the southwest flank along County Roads 3 and 30, and the Williams Fork River, preventing damage to the Henderson Mill. On the north and east flanks, firefighters improved roads and other natural features to create defensive lines to protect the communities of Fraser, Tabernash, and Winter Park.

The fire grew by about 100 acres on Friday, September 25, as strong winds from the west pushed the fire east towards McQueary Lake and the Vasquez Peak Wilderness. Wind gusts up to 60 mph were recorded on Berthoud Pass. Red Flag conditions returned Saturday with more extreme fire behavior causing around 300 acres of growth.

The fire was active again on Tuesday afternoon as red flag conditions returned to the area. The fire continued to grow in the McQueary Creek drainage near Jones Pass and the Richey Creek drainage near Keyser Ridge, with two plumes of smoke visible from Grand, Summit and Clear Creek counties. Two Type 1 helicopters worked the north flank of the fire to keep growth in check between the fire perimeter and Keyser Creek.

The weather outlook for the foreseeable future calls for continued extreme drought conditions with weather conducive to active fire behavior, including low relative humidity, temperatures 10-20 degrees warmer-than-normal, and 20 mph winds out of the west/northwest.

The fire is currently under command of a Type 3 team led by Incident Commander Ed Leblanc and a supporting team of 88 personnel. More resources arrived at the fire on Wednesday, including crews, engines, and aircraft. A Type 2 team has been ordered. The multi-mission aircraft has flown the fire and updated acreage. Currently, the fire encompasses 13,247 acres and is 25% contained.

Due to steep rugged terrain and dead and dying trees caused by Bark Beetle, indirect fire line tactics are being utilized. Natural barriers such as avalanche chutes, rock screes, high elevation alpine tundra ridges, previous fuel treatment areas, recent burn scars, and wet drainages have been identified to slow the fires’ spread. Bottle Pass, Saint Louis Pass, Fraser Experimental Forest (FEF) Headquarters and the Denver Water buildings located in the Bobtail drainage have been identified as areas of point zone protection. Fuels mitigation and placement of water handling equipment have been completed around the structures in both the FEF Headquarters.

Due to increased fire activity, the US Forest Service reinstated the larger closure area that includes roads, trails and campgrounds in the Keyser Creek, Crooked Creek and St Louis Creek areas. Please visit www.fs.usda.gov/arp for details. Due to the weather outlook and fire behavior, the forest closure order is expected to remain in place, as is, through at least the middle of next week.

Grand County remains in Stage Two fire restrictions, which prohibits smoking outside and campfires except for propane-fueled stoves.

Safety Message: The entire area within 2 miles of the fire is a “No Drone Zone.” If you fly, we can’t.

Information about air quality advisories and health concerns related to wildfire smoke can be found at fire.airnow.gov or colorado.gov/airquality/colo_advisory.aspx.

The fire is burning within Game Management Unit 28. Hunters holding licenses in game management units impacted by the fire may be able to request a refund and reinstatement of preference points used to draw the license. For updated hunting from Colorado Parks and Wildlife, visit cpw.state.co.us.

The Fire is under investigation

Trained fire investigators have determined that the Williams Fork Fire started by human activity, but the specific cause is not yet known.

If the public has any information, images or video of the area that may be helpful to the investigation, please email them to SM.FS.usfsarp@usda.gov. Information can also be shared by calling (307) 745-2392, selecting option 5, and leaving a name and phone number so law enforcement can return the call.

Investigating wildland fires is a legal process that requires the fire cause to remain confidential until the process is complete.