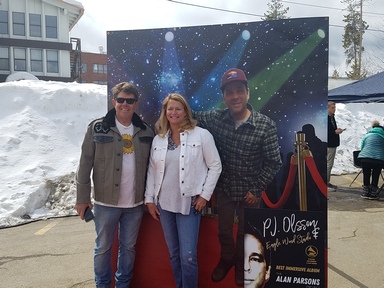 On Sunday, March 24, over 300 members of the community gathered in the Winter Park Arts District to celebrate local musician and recording artist, PJ Olsson’s Grammy win. “I feel very fortunate to have so much support”, said Olsson.

The celebration doubled as a fundraiser for the Remi Olsson Memorial Fund, which benefits talented middle school and high school students with recording time at Eagle Wind Sound studio. “Our total raised has surpassed $4000 and is still growing”, said Shannon Henn of Uptripping.

Henn told the Winter Park Times, “The event was a huge success and incredible tribute to PJ Olsson. He was so overjoyed with the turn out”.

PJ was on tour during the Grammys, so the event included a Grammy presentation re-enactment and PJ gave a touching speech to the crowd. He also sang a song he wrote for his son, Remi, whose name the recording scholarship will honor.

“It was a heartwarming event and we can’t wait to bring more music and art to the community this summer with First Fridays and private concerts at Eagle Wind Sound studio”, said Henn.