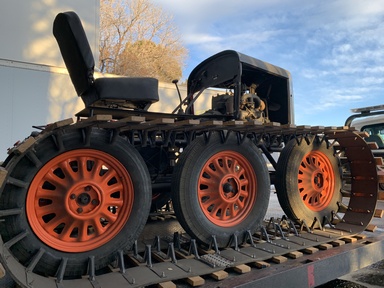 An antique snowcat was recently delivered to its new home, thanks to the collaboration between the Colorado Snowsports Museum and Karol Ann Groswold /Groswold Ski Company. The Groswold family is one of the true pioneering ski families in the state of Colorado.

Donated to the Colorado Snowsports Museum in 2004 by Jerry Groswold, Winter Park Recreational Association CEO, the 1950 Thiokol prototype snowcat originally saw action grooming the slopes of Winter Park.  The snowcat is in good condition and it has been rumored that it still runs. Come spring, the Groswold Ski Company plans to take the snowcat out for a spin.

In October of 2018, Museum Curator, Dana Mathios, began working with Jerry Groswold’s daughter, Karol Ann, in an effort to find a new home for the snowcat.  It had been housed for many years at the Rocky Mountain Conveyer warehouse in Denver, courtesy of David Kelly, former Museum board member.

Shanna told Groswold that Cozens Ranch, located just outside of Winter Park near Fraser, would be thrilled to put the snowcat on display.  Cozens is undergoing a major renovation which should be completed in late spring.

The Grand County Historical Association is launching a capital campaign for building expansion and improvements at three of its four museums: Cozens Ranch, Pioneer Village and Heritage Park. The first step is creating a master plan that starts GCHA off with an initial cost of $60,000 for the three sites. This process will begin with holding community and stakeholders’ meetings so that Cozens is able to meet the needs of the people of Grand County.

GCHA has partnered with THK & Associates from Denver to assist Cozens with this process. Cozens Ranch is slated to be the home of the Winter Park Ski Museum, celebrating the long history of skiing in Grand County, beginning with the first Winter Carnival in Hot Sulphur Springs  in 1911. 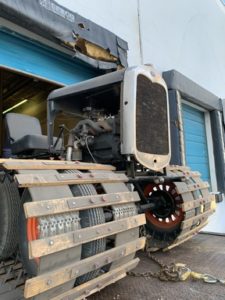 The Thiokol was transferred to the Groswold Ski Company in December.  Dave Tscherpel, of Double Check Towing, transported the snowcat to Fraser, where it is currently being stored in the garage of Fred and Carol Moore, owners of the Coffee and Tea Market in the Balcony House at Winter Park Ski Area.  The Groswold Ski Company is tremendously thankful for Tscherpel’s diligent care of the snowcat while it was in transit and for the Moore’s, who graciously are storing the snowcat until it is put on display at the Cozens Ranch.

The Cozens Ranch House was built by William Cozens, sheriff of Central City, after he married Mary York. Mary insisted that they leave the wild mining town, so the Cozens family relocated to Grand County, where they started the ranch in 1874.  The homestead was the first in the Fraser Valley.

The original two-story ranch house was constructed in 1874. A stagecoach stop was added in 1876, where travelers coming up Berthoud Pass could stop for a hot meal or a room for the night. At its height, the ranch comprised over 600 acres.

“A huge thank you goes out to Karol Ann Groswold for helping to bring this transition to fruition,” offered Mathios.  “This has been a wonderful collaboration and I am proud to say that a unique piece of Colorado ski history has been preserved and will be available to the public because of her dedication and commitment”.

The 1950 Thiokol snowcat will be representative of the historic evolution of snow grooming.  The pioneers who laid the foundation for what has become a vastly popular Colorado snow sport.