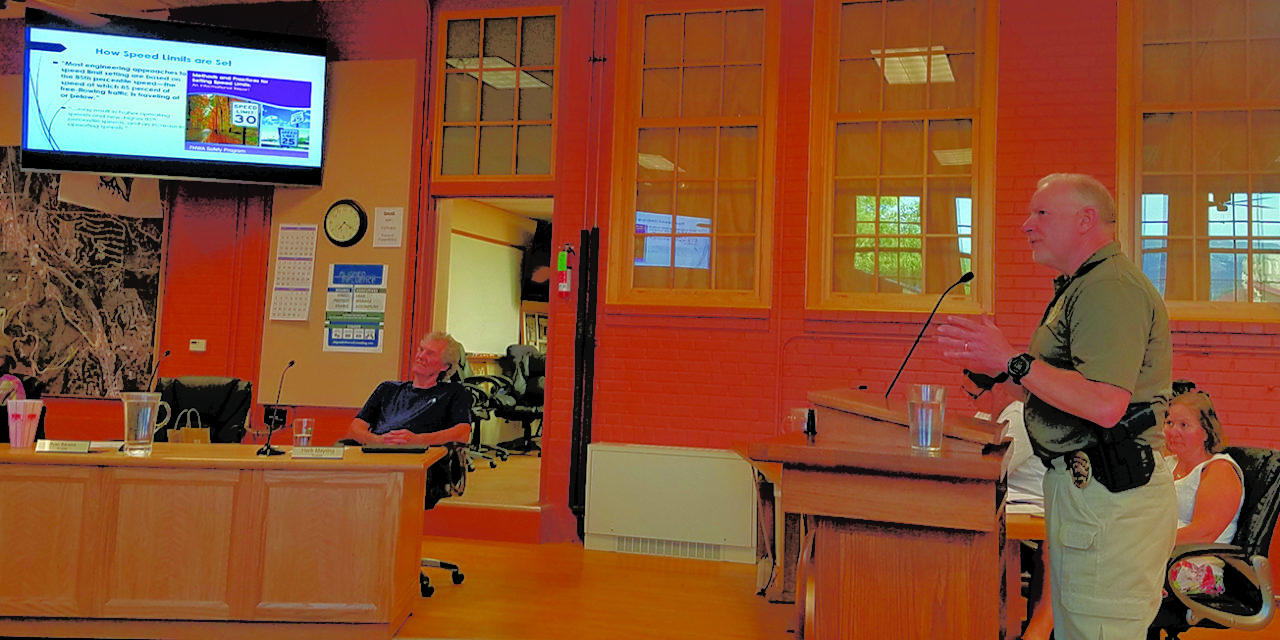 At the June 13th Board of Trustees meeting, Fraser Winter Park Police Chief, Glen Trainor, presented detailed information about his department’s performance and shared statistics related to speed and pedestrian safety with the Board and Town staff. Prompted by citizen’s comments at a recent Trustee’s meeting requesting added traffic enforcement, Trainor’s presentation provided numbers pertinent to both the Town of Fraser and also for Winter Park.

“I appreciate the relationship I have with all of you,” said Trainor. “This is a quandry – the mystery of keeping the people who live here happy.”

In a memo sent to Town Manager, Jeff Durbin, on May 20th, Trainor defined the purpose and goals of Traffic Enforcement to be “to reduce speed-related traffic collisions, and specifically injury and fatal crashes”; and, “improve the safety and quality of life for the community through traffic law compliance”.

He went on to cite Fraser statistics for the period of May 1, 2017 – April 30, 2018. During this period, the Fraser Winter Park Police Department investigated 56 traffic collisions, broken down as follows:

Of the accidents investigated, the department was only able to identify three collisions (1 injury) to be speed-related, occurring between the 100 and 400 block of Zerex Street. He added that it does not mean that other collisions could have been prevented by reduced speeds, but it was a primary contributing factor in those 3 cases. The majority of the other cases were primarily the result of not paying attention to the driver’s surroundings (e.g., following too closely, distracted driving, etc.).

Trainor told the Board “The above statistics do not indicate there to be a “speeding problem”.

Speeding can generally be broken down into two areas:

While the 35 mph speed limit in Fraser and Winter Park has long been contested to be too fast and unsafe for pedestrians, Trainor stated that speed limits are set, based upon the 85th percentile of the average speed driven on a defined section of road. Careless driving is the most commonly cited violation. “People will drive the speed they think they can go”, said Trainor.

He told the Board that the Fraser Winter Park Police Department is “handling 50% more calls than they did in 2014, and staffing has only increased 11% during this four year period”. He said that the calls can vary as to how much time is spent by staff, saying that one call could take a few minutes to resolve and another could take hours. Overall, his Department spends 35% of their time on traffic-related issues, proving the high priority placed on traffic safety.

Trainor told the Board that their plans for traffic calming are “spot on”. He said that the side streets should also have some sort of calming tools such as speed bumps. “The narrower the lanes are, the slower the vehicles are likely to go”. He added that Bicycle lanes also help slow traffic.

His department had investigated the option of installing traffic cameras, but found the cost to be prohibitive, with an estimated cost of $80,000 for startup and another $60,000 annually. With those numbers, the “town would need to write 600 citations per year just to break even”.

Trainor said “The goal is to try to change behavior and build relationships with the community. Zero tolerance would diminish trust in local government and the Police Department”. He stated “I’m not your guy, if this is the course you want to take. I and my staff are not the right people to fulfill this mission”. “Heavy handed law enforcement is not what Winter Park and Fraser needs.”

“Does Fraser have a speeding vehicle problem, and, is increased law enforcement the way to deal with it?”. He asked the Board “Is it worth the $800,000 a year it would cost you for 7-8 officers to manage this?”. And, most importantly, “is it worth the reputation Fraser will get for it?”.

Chief Trainor closed his presentation by telling the Board and staff “I want to affirm my loyalty to you. There are very few issues we can’t work through with good communication”.

To read the Chief’s full report, visit the Town’s Agenda Center on their website: frasercolorado.com