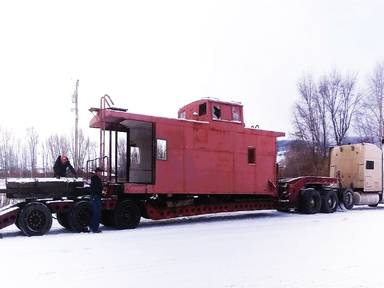 The Moffat Road Railroad Museum in Granby achieved its latest goal this past weekend when a 1905 Moffat Caboose was positioned on a set of matching trucks, fulfilling a three-year effort to bring the Caboose back home to Grand County.

The 32,000-pound caboose was originally all wood and built for David Moffat’s Denver, Northwest & Pacific Railway, which he’d envisioned as connecting Denver to Salt Lake City and then the Pacific Coast. Railway construction began in 1904, following a historic Ute trail and contemporary wagon trail over Rollins Pass and the Continental Divide Construction began smoothly, and tracks first reached the Fraser area in late 1904. They continued west, reaching Hot Sulphur Springs in 1905 and Kremmling in 1906. The train would open up Grand County to increased settlement and greater economic opportunity.

But constructing a railroad was expensive and, running out of money, Moffat headed east, looking for investors to help complete construction of the railway and the originally-planned tunnel that would save time and effort by passing under the Divide instead.

The caboose now sitting on a set of tracks in the Granby museum yard would have been in use between Denver and Grand County in those early years. It would have passed over the Divide and then under it, when the Moffat Tunnel was finally opened in 1928.

It was damaged in an accident in 1930 and had to be rebuilt with a steel caboose on the original frame. Over the next 90 years, it would be sold to the Denver Rio Grande Railway, then used as a weed sprayer before being decommissioned in 1983. It sat on someone’s lawn for 30 years, was sold again, and finally came to the attention of Museum Director Dave Naples.

Naples spent three years negotiating the purchase of the important artifact, and the Museum finally acquired it for $7,000 and a share of moving costs. Next steps will be to restore it to its original condition and appearance.

The caboose joins the ever-expanding attractions at the Railroad Museum, including a 1,000-square-foot Christmas-themed model train exhibit, a 1913 Steam Derrick crane, a train depot and new visitor’s center, and–coming in 2021–a rideable, 18-inch gauge replica of the Moffat steam locomotive, pulling five cars and a caboose.

The Moffat Road Railroad Museum is now closed for the winter but will reopen on June 1. To learn more and plan your summer visit, look for them on Facebook or go to moffatroadrailroadmuseum.org.