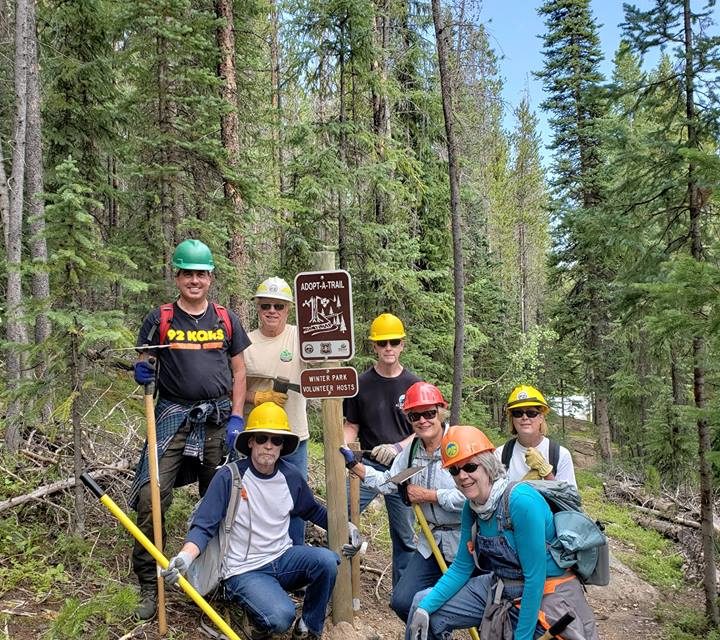 On Tuesday, the Board of County Commissioners held a workshop on Grand County Trails, focusing on Headwaters Trail Alliance (HTA), the county’s primary resource for all aspects of trail management. While no decisions can be made in a workshop, it does allow for healthy discussion on subject matter.

County Manager, Lee Staab, presented an overview of HTA to the County Commissioners. He highlighted HTA’s mission, purposes and objectives, the economic, environmental and health benefits of a well managed trail system and went over Grand County’s current funding and support of HTA projects.

HTA Board member, Scott Ledin, next walked the commissioners through a presentation he’d prepared on HTA with a goal of securing a dedicated funding source to provide for day to day operations.

Historically, the county was involved in the establishment of HTA. Ledin described “In the mid 1990’s, an explosion of interest in residential development occurred in Grand County, and the integrity of the vast trail system was threatened.” They first initiated the development of the Headwaters Trails Master Plan, in 1995, identifying the scope of need in preserving and enhancing trails in Grand County. They then proposed the creation of an intergovernmental agreement (IGA) within Grand County to develop a coordinated effort by all jurisdictions to address the needs identified in the Plan.

Ledin described the economic, environmental, health and transportation benefits of a good trail system. “With Outdoor Recreation, there are a lot of pieces”, said Ledin. “There is no specific data related to trails and economic impact, but you can see the impact that trails and mountain biking has on our community.”

Ledin went through a list of similar mountain counties, noting that San Miguel, Pitkin, Summit, Eagle and Mesa counties have County Parks & Open Space and/or Trails Departments with budgets in excess of $1 million per year, funded either by mil levy, sales tax or general funds.

In Grand County, the county provides HTA with $22,500 in donor-advised funds, administered through Grand Foundation. Additionally, HTA receives $10,000 from the Town of Winter Park, $6,000 from the Town of Fraser, $7,500 from FVMRD, and $3,000 from the Town of Grand Lake, totalling $49,000, to cover annual operating expenses. 85% of their funding is grant-based, primarily funding projects, not administrative costs.

HTA Executive Director, Meara McQuain, told the commissioners that the payroll costs for two full-time, a part-time and summer seasonal staff is about $120,000 per year (including taxes, insurance, etc.). The HTA Board approved “dipping into HTA reserves” to cover the cost of a second full-time employee, out of necessity, in 2017.

Ledin gave the commissioners an overview of numerous HTA accomplishments and planned future projects. “Where can we find dedicated funding to support and address the needs we have across the county?”, Ledin asked. He outlined some options for the commissioners to consider:

Most of the 700 miles of public trails in Grand County are located on federal lands. Federal funding is minimal, especially for non-motorized trails, of which Grand County has about 55%, according to McQuain. John Morrissey with the USFS told the commissioners “Without HTA, we could not provide a sustainable trail program to the public, and, without them, we cannot do our job”.

The Open Lands, Rivers & Trails 1A fall 2018 fund cycle avails about $65,000 in grant funds, due to the 15% cap for Trails imposed by the Ballot Resolution. HTA will not be the only applicant vying for funds. As was discovered in the spring 2018 grant cycle, requests for administrative expenses are not eligible for funding per current Ballot language.

Commissioner Linke acknowledged, “We know trails don’t happen without HTA.” He asked whether administrative costs can be built into grant funds.

Ledin told the commissioners they could include administrative costs for projects, but pointed out that grants are not guaranteed, as competition for funding grows.

Keith Sanders of Grand Mountain Bike Alliance spoke in support of HTA’s efforts, telling the commissioners “it’s not only the quality of trails and user experience. HTA manages all of the trails, has dialog with adjacent landowners, works on planning and also accepts responsibility for county trails that would otherwise go unmaintained”.

Open Lands, Rivers and Trails Advisory Committee Chair, Paul Bruchez, told the commissioners that the committee has struggled with 1A language restricting trail funds to maintenance only and with the 15% limit. But, “it has a 10 year sunset, so program longevity is minimized”. The committee hopes the concept continues and grows beyond the ten year mark, but 1A Funds are not a long-term solution to funding.

Fraser Town Manager, Jeff Durbin, thanked the commissioners for looking into revising the Ballot Measure and removing the 15% cap, which he felt was set too low. Noting several towns that had not shown up for the workshop, he said “HTA needs countywide support to succeed”.

During commissioner discussion, Commissioner Cimino told the commissioners “I’d like to narrow the problems we need to mitigate/solve”. He told them there was no debate on the economic value of trails or of county-wide support. “Let’s set a level of operational expectation”, said Cimino. “We need to find a dedicated funding source, and, maybe it is under Economic Development.” He said he completely agrees with Commissioner Manguso that base funding needs to be set by the County. Cimino said he’d like the topic to be added to the next Mayor’s and Manager’s meeting agenda, saying “we need consistency”.

Commissioner Linke stated he would like to look at the pros and cons of creating a County Trails Department.

Commissioner Manguso stated she was in favor of providing a base level of funding in the budget. “HTA is stronger as a non-profit.” She told the commissioners that she was okay with exploring anything else, but keeping HTA ‘as is’ would be “less expensive than creating larger government”.

Staab reminded the commissioners that they were entering the county budget cycle and would need direction soon.

The commissioners agreed to look into the Ballot Measure 1A resolution language and would investigate what is needed to make a change. They will develop operational models in preparation for next month’s Mayor’s and Manager’s meeting, and will explore creating a county department. Commissioner Linke thanked the members of the public who attended the workshop and assured them “we will look into this”.

Following the workshop, HTA Executive Director Meara McQuain told the Winter Park Times “This workshop was a positive step for the future of our trail system and recreation based economy”. McQuain went on to say “HTA was pleased to hear that the County’s leadership acknowledges the importance of outdoor recreation to our economic viability. Finding a source of dedicated annual funding for HTA will benefit all residents and visitors of our community by providing a safe and well maintained trail system for all types of outdoor enthusiasts.”

For more information, or to listen to the audio recording, visit: co.grand.co.us.