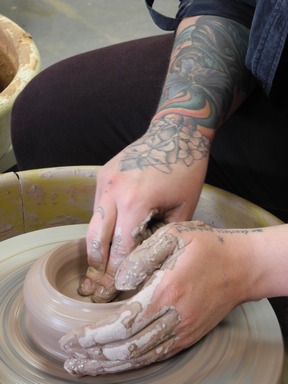 Settled in the picturesque town of Winter Park, framed with the majestic Continental Divide to the east, the 46th annual Winter Park Alpine ArtAffair returns this weekend to the Rendezvous Event Center at Hideaway Park: 9 am – 5 pm Saturday and 9 am – 4 pm Sunday, July 13 and 14. 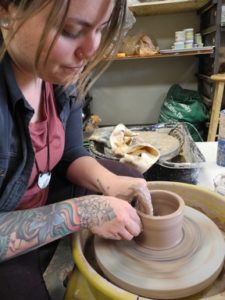 McDermott returns for her second year at the ArtAffair, originally visiting Grand County from Minnesota in 2009. She said she called home and said she wasn’t going back. Mutual friends introduced her to partner Brandon Mach (musician and carpenter), the couple moved to Tabernash, and in September their adorable son Milo (also a budding artist) will be five.

“I felt like I had really found my community and that I really just fit.” She said she “really fell into my creativity when I moved to the mountains. With so much inspiration around this Valley I really bloomed in all of my art.”

McDermott said her “mediums seem to be growing all the time.” She has painted for years, carves stamps and dabbles in printmaking, hones her sewing skills (including macramé), recently discovered a love for ceramics, and she hopes to study more techniques in silversmithing (she got hooked after an apprenticeship with Rayburn).

McDermott can usually be found at her pottery wheel at Sunnyside Pottery (Fraser Valley Shopping Center) at least two days a week. “I sure love it,” she said of the wheel, purchased from a Boulder lady who was retiring. McDermott said there was one condition when she drove down to get it: that she takes all the supplies. She not only filled up the truck bed with tools, books, kiln and wheel, but the cab too.

She has several paintings which can be seen at Wake ‘n’ Bacon, and McDermott says she’ll have another big piece at the ArtAffair if she’s able to finish it in time. She also plans to have several pieces of jewelry she “tried out on a whim.”

“It’s sporadic on where my creative juices flow,” she said. “I feel so drawn to art in any form.” Inspirations include the surrealism of Salvador Dali, and portrait work by Picasso, Frida Kahlo, and Van Gogh. “I feel as though it takes so much courage to show the world how you see yourself.”

This weekend McDermott will be accompanied by fellow artists from Sunnyside Pottery: Josh Warren, Jordan “Jordy” McNamee, and Michaela Cross. She hopes people who come by their booth feel as connected to the earth as she does when creating it. “I love the feel of handmade ceramics, the rough and smooth textures both bring out such different feelings of the earth. And visually seeing shapes and textures that surround us adds to that feeling of connectedness.”

This year’s commemorative ArtAffair poster highlights a pastel of Byers Peak by part-time Tabernash local Anne Astrella Buel, who said she focused on the textures and colors of the fall grasses around the “iconic peak”. Previous years’ posters have become collector pieces (created by Karen Vance, Cathy Rapp, Elizabeth Kurtak, and Laura Veenstra) and may be purchased for $25. Cheryl Day, event director, said she was thrilled Buel was willing to donate the image.

Proceeds from poster sales, and booth and application fees go toward scholarships available to local students and artists. This year, the ArtAffair has awarded four-year scholarships to Kiana Ledin of Fraser and Connor Life of Hot Sulphur Springs, and a one-year scholarship to Kye Kuriyama of Granby.

Ledin has signed up for a dual major in theatre and journalism at Loyola University in Chicago, Ill. Life heads to Denver University to study trumpet performance. With inspiration from local Grammy winner and mentor PJ Olsson, Kuriyama starts his freshman year at Middle Tennessee State University as an audio production major.

For as long as she can remember, Ledin has been expressing herself “in a creative fashion.” She said she feels incredibly blessed to receive the scholarship. She loves to sing and dance and “show my personality.” School has taught her that her career and her passion can be the same thing. Theatre was her “open door to show the world” what she has to offer, and the ArtAffair has helped her pursue her goals further. “I am absolutely in love with the different sides of art and how the ArtAffair is showing a new meaning to the word ‘artistic’.”

“I think that it’s especially important for young people in Grand County to have opportunities to see art and music events, so that we might discover a lifetime passion,” Life said. The ArtAffair is unique, he continues, because it uses the proceeds to help further the educations of local art students. He said he is “delighted to have this kind of support from people within Grand County.”

The ArtAffair has gifted more than $30,000 since its inception to more than a dozen local students pursuing the arts. Previous recipients include Theo Loo, Linneya Gardner, Ashley Trotter, and Amelia Matteson.

Folks are invited to mill about this weekend to the various booths while listening to local music to include Brandon Mach (Saturday) and Red Dirt Hill (Sunday). There’s also community and charitable areas, including the popular bird of prey educational booth by HawkQuest.

The Lions Club provides a pancake breakfast 7:30-11 am both mornings.