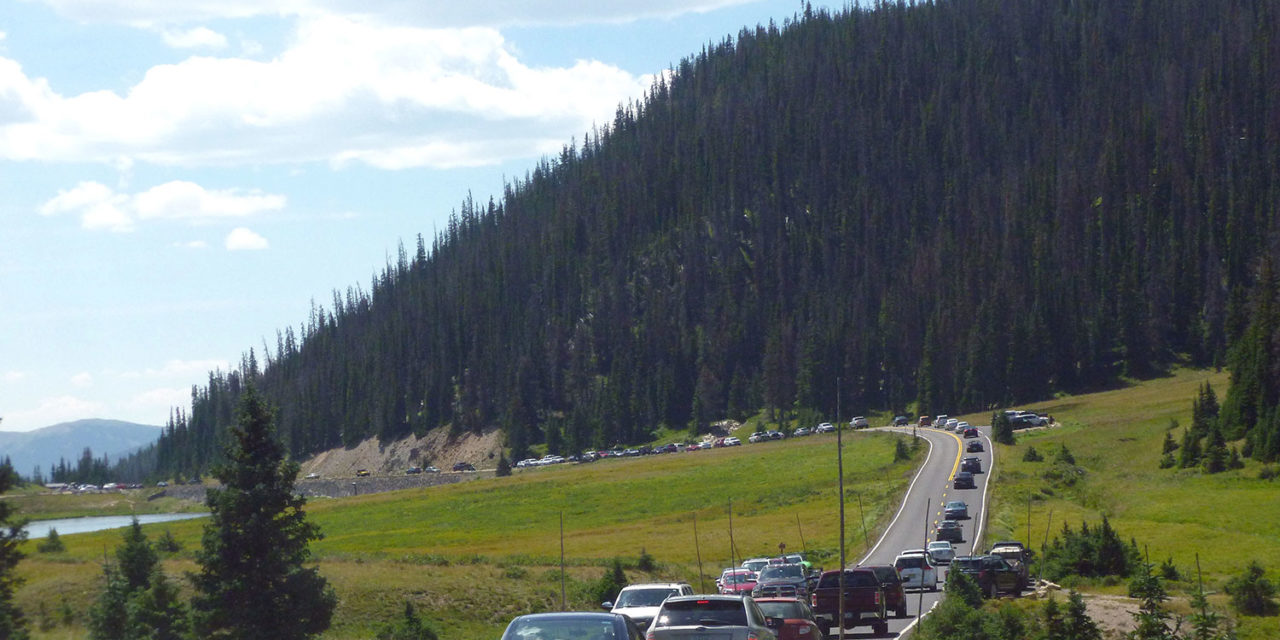 Recent discussion at the Grand County Board of County Commissioners (BOCC) meetings has included seasonal updates from around the county about the state of our natural resources and related infrastructure. Local organizations, such as Rocky Mountain National Park and Grand County Water Information Network, have presented on current happenings. And as occurs frequently in Grand County, conversation often turns to water issues.

Grand Ditch Blows Out & Traffic Blows Up In RMNP 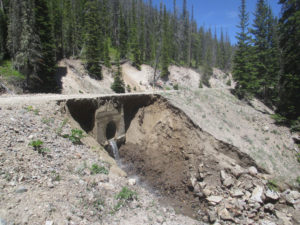 A blowout in a wasteway at Lady Creek in June caused flooding and turbidity issues downstream.

Rocky Mountain National Park (RMNP) Chief of Planning and Project Stewardship, Larry Gamble, showed images of a blown-out culvert on Lady Creek, beneath the Grand Ditch. The Grand Ditch, first dug in 1890, is a 14.3 mile water diversion project that transports water from Grand County’s Never Summer Range to the eastern plains. Gamble explained that during the original construction, wasteways were constructed at every natural stream crossing, in order to release water as needed. The wasteway at Lady Creek had been artificially plugged at some point, but failed this spring.

The leak was first reported on June 17, when Water Supply and Storage Company, owner of the Ditch, informed Park staff that they had “made temporary repairs to reduce the leak and opened head gates to reduce water flow, sending additional water to the Kawuneeche Valley.” A portion of the Colorado River Trail was flooded and turbidity was reported downstream near Shadow Mountain Reservoir. Gamble stated that staff were still assessing what happened and any long-term impact.

RMRP Superintendent Darla Sidles was also present and discussed increasing visitation and traffic as a separate issue of concern for the Park. She indicated that, in the last three years, visitation has increased 40 percent, bringing RMNP up to the fourth most visited National Park, ahead of even Yellowstone. She indicated that the growing popularity was due in part to the recent Centennial Promotion, cheap gas, easy access from a growing metro area, and an increased interest in outdoor activities.

But while Sidles expressed a positive response to the economic possibilities of increased visitation to the region, she also detailed some of the challenges. She noted that traffic and parking is becoming an issue and that there has been an increase in “bad” behavior”– visitors getting too close to wildlife, taking vehicles off designated roadways, parking in restricted areas, etc. In looking at these issues, she says the Park’s primary concerns remain resource protection, public safety, visitor experience, and operational capacity.

However, she said that these problems are not exclusive to RMNP, but are being faced across the national park system. Zion National Park, she said, implemented a shuttle system years ago to relieve traffic, but has since discovered that increased foot traffic is denuding the canyon. Arches National Park is looking at implementing a booking/reservation system. At RMNP, she says, they will be hiring a planner this fall to help find and implement “more ideas of the things we can do and still remain as adaptive as possible.”

Foulk shared program changes with the BOCC, such as the adoption of 8 new stream temperature monitoring sites, bringing the project total to 41 sites that record data every 15 minutes. She added, “this data has been integral in setting Colorado stream temperature standards, establishing stream flows in the County Stream Flow Management Plan, and informing negotiations over proposed increases in water diversion projects.”

She explained a new photography element for the 10-year old Secchi monitoring program at Grand Lake. “This is a great new addition to the program,” she said. “It will help to connect the collected data to the physical appearance of the lake.” The photos will provide additional information to the Grand Lake Adaptive Management Committee and the ongoing effort to improve Grand Lake clarity.

Foulk also explained upcoming changes to the accessibility of GCWIN’s Water Information Library and Unified Reference, known as WILBUR. The database, she said, includes over 8 million lines of data. It is publicly accessible and “entities will soon have the ability to download a backup copy of the database so that more technical data analysis can be achieved.” The resource will also include information about other available data, who has it, where it’s located, and how to obtain it.

A former field technician for the program, Foulk has now been director for only a few months. But her enthusiasm for the organization and its work is contagious. “We are the ones on the ground collecting data. We’re the science behind the words.” For more information about GCWIN, WILBUR, and volunteer opportunities, visit gcwin.org.

County Supports Hot Sulphur Grant
In more direct action, the BOCC signed a letter of support for the Town of Hot Sulphur Springs, which is seeking a $60,000 grant from the Colorado Water Conservation Board to complete an engineering study “to address erosion control, bank stabilization, in-channel improvements and cost opinions” on the section of Colorado River adjacent to Pioneer Park.

The section in question is within town limits, and its easy accessibility makes it a popular spot for anglers. However, the natural erosion process is causing deterioration of the river’s bank, including the edge running just beneath US Highway 40. In the last year, sloughing of the hillside has prompted the narrowing of the intersection of Hwy 40 and Park Street, in order to shift traffic further from the vulnerable edge.

In the letter, Commissioners expressed concern that if the river were to “continue to exacerbate and eventually compromise US 40, this would eliminate critical access for our visitors and tourists that recreate in Grand County, As well as impact emergency response, as there is not an alternative route to Byers Canyon.” It also mentions slated stream enhancement work already identified in the Colorado Parks & Wildlife Fish & Wildlife Plan for the area. An engineered solution for erosion mitigation is desired prior to the planned Habitat Project.

While the Board gave full support to the grant application, Commissioner Merrit Linke vocalized a desire for the study to result in an actualized solution. “I think the town has the energy to see this through to actual work, and this Board does as well,” said Commissioner Rich Cimino. Commissioner Kris Manguso indicated that there was state concern as well and that State Representative K.C. Becker will be visiting the site.

Becker will tour the area with members of the BOCC and Town officials on August 17. She will follow up with a town hall meeting at the Granby Library, from 5:30 to 6:30 p.m.