Accidents on the rise. Winter driving, weed or other distractions? 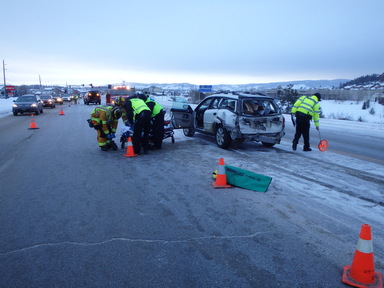 The highways of Colorado are dangerous enough in the winter.  This fender bender on Highway 40 last week in Fraser sent two people to the emergency room with serious injurys. This is a reminder of the hazards we face everytime we climb behind the wheel.

A distracted driver caused this accident just past Murdoch’s plaza. The driver at fault admittedly falling asleep at the wheel and rear ending the unaware driver but are our highways becoming more dangerous?

A recent study by the The National Transportation Safety Board said, “On average car accidents are up in Colorado and other states with legalized recreational marijuana.”

In its report, the board says there has been an increase in the number of drug-impaired drivers across the country and that something must be done about it.  That call to action seems to match up with a report released late 2018 from the Insurance Institute for Highway Safety’s Highway Loss Data Institute.

Though a 2017 study found that the legalization of recreational weed has not increased the number of accidents involving fatalities, states that have legalized recreational use are seeing more car crashes overall, according to the report, which includes two studies presented at the Combating Alcohol- and Drug-Impaired Driving summit at the insurance institute’s Vehicle Research Center.

The first study found that crashes are up as much as 6 percent in Colorado, Washington and Oregon, compared with neighboring states that haven’t legalized recreational use of weed.

Researchers estimated the frequency of collision claims per insured vehicle year, controlling for differences in other factors that could contribute to an accident, including age, location, job status and weather, and still saw an increase.

The second study looked at the number of police-reported accidents before and after the legalization of recreational use of weed.

The findings were similar: A 5.2 percent increase in crash rates after legalization than before weed was legal in those states.

Other research has found that in a small sample of drivers who used weed before driving, they had slower thinking and perceptual skills.

Drivers under the influence of weed tended to weave more when tested in simulators, studies show, although scientists say more research needs to be done to better understand the correlation between blood or oral fluid concentrations and psychoactive effects of tetrahydrocannabinol, the main psychoactive ingredient in cannabis.

Driving while impaired by any substance, including marijuana, is illegal in all states.

The National Transportation Safety Board said in its report on the fatal accident in Texas — where recreational use is illegal — that police across the country need better training and better tools to detect whether a driver is under the influence of drugs.

It also encouraged the National Highway Traffic Safety Administration to come up with a system of best practices and model specifications for oral fluid drug screening devices that police can use when they pull someone over.

There are no national standards or standardized tests for weed-impaired drivers like there are for alcohol.

The tests designed to determine whether someone is driving drunk are only moderately successful in determining that someone is impaired from using weed, studies have shown.

About 6 in 10 Americans support marijuana legalization, an October poll found, and thus more states will probably legalize recreational use — meaning there will probably be more drivers on the road under the influence.

Whether it is weed, your cell phone, fried chicken or mother nature we all need to pay close attention to our habits behind the wheel.