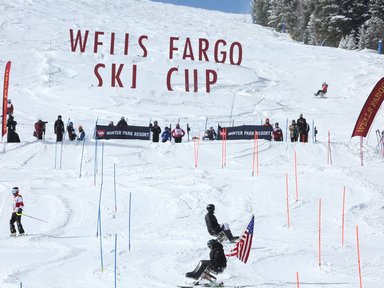 The NSCD offers adaptive lessons for individuals and groups with disabilities in a variety of action sports, adventure sports and competitive programs. Children and adults with any physical, cognitive, emotional or behavioral diagnosis can participate in sports and recreation programs throughout the year.

The NSCD’s recreational programs help individuals build self-confidence and improve overall health in programs such as skiing, rock climbing, water sports and therapeutic horseback riding. Kim Easton, President/CEO for the NSCD, said, “We started as an alpine skiing program but are now a year-round program serving all disabilities and all ages.” Easton added, “We have something for everyone and remain fluid and dynamic in our offering so we can say ‘yes’ to whatever someone wants to do.” 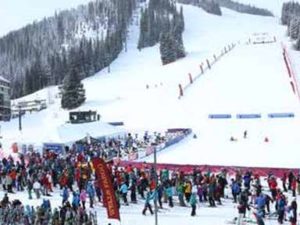 This weekend, the NSCD’s competition program takes the stage in a series of races that bring out the competitive nature of the human spirit. Competition Program Director Erik Petersen said, “Our team offers a way for independent athletes to compete at an elite level in international alpine and nordic competitions”. Petersen added, “We have athletes from all over the world on our team.” The camaraderie of the NSCD team “is priceless.” Petersen stated, “These guys and gals push each other to be the best they can be everyday.”

It is obvious that the NSCD Competitive Team is one of the best in the world. On average, nine (9) different countries are represented on the team at any given moment. Many members make Winter Park their home during the winter months to train and compete with the program full time.

Petersen said, “The PyeongChang 2018 Paralympic Winter Games really opened the door for the athletes”. The 2018 games caught the eye of the media with world-wide television coverage. Disabled programs around the world had an influx of new participants with their sights on the podium and the next Paralympic games.

“The Paralympics movement is trending in both summer and winter sports.” The next winter Paralympic games are scheduled for March 2022 in ‎Beijing‎, China.  Petersen said, “We have several team members that have a real chance at the podium in the coming years.”

It is exciting to see the evolution of the sport. “It’s really starting to take shape.” Petersen added, “The Olympics and Paralympics are very different organizations, but both feature athletes performing at the top of their field.”

According to Petersen, “Competitive racing is a tough road,” and it takes stamina and commitment.   While some Olympians may land lucrative sponsorship deals, many competitors struggle with the financial strains of coaching, travel, equipment and more. Petersen said, “Many of our athletes couldn’t compete at this level without support of family, local sponsors and corporate donations.”  That is what makes the Wells Fargo Ski Cup so special.

Both the NSCD and Wells Fargo Ski Cup trace their roots to the 1970s and one man’s ski lessons that became a vision and model for disabled programs around the world.

In 1970, while working as an instructor at Winter Park Ski Resort, Hal O’Leary volunteered to teach skiing to amputees from the Children’s Hospital in Denver. Eleven students came up in a van on that very first lesson and O’Leary said, “It was almost chaotic at times and we quickly learned we needed to adapt to their needs and make it work.” 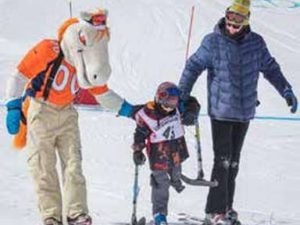 The power of the program was immediate and after the initial offering, a day that changed the lives of a handful of kids from Children’s Hospital and the participating instructors, a visionary commitment was born. Winter Park Resort became the home for the new disabled sports program and stakeholders quickly realized that a sustainable funding source was necessary to ensure its survival.

The Wells Fargo Ski Cup, which began in 1975 as a promotion for Winter Park’s new Mary Jane ski territory, would become the platform for fundraising for the new adaptive program. Wells Fargo’s predecessor (First Interstate Bank) had signed on as sponsor of a new dual slalom “Pro Race” style event and agreed to make the NSCD program a beneficiary. The event racing format has changed over the years, but Wells Fargo has remained the event’s title sponsor for the National Sports Center for the Disabled signature event ever since.

Kim Easton said she has a pretty good idea why the Wells Fargo Ski Cup in Winter Park has become the country’s longest running professional ski race. “There are very few fundraising events like the Wells Fargo Ski Cup,” Easton said. “It’s not a gala, or golf tournament, or a breakfast, but an opportunity to actually see and experience what we do.”

“For the past five decades, the NSCD has provided service to over 150,000 children and adults who are living with a disability that want to enjoy sports and the outdoors,” said Easton, President and CEO of the NSCD. “We are able to provide services because of events like the WFSC and donors who have provided continued support that help facilitate operations and programming. In the past 50 years, one thing has remained the same – we are passionate about providing a bridge to adaptive sports for individuals with almost any physical, cognitive, emotional or behavioral diagnosis.”

Money raised at the Wells Fargo Ski Cup allows the NSCD to offer year-round sports experiences to more than 4,000 children and adults each year — a group including 3,800+ recreational athletes, 65 members of its Competition Center and 175 military veterans. Over 1000 volunteers and a small staff provide more than 18,000 lessons throughout the year.

“Wells Fargo Ski Cup raises more than $250,000 each year and is important to the ongoing success of the NSCD, since participant fees cover only 15 percent of program costs,” said Easton. “The rest comes from Wells Fargo Ski Cup proceeds, individual donations, grants, sponsorships, and other fundraisers.”

Whether it’s the Kids Snowplow Sprint (for children ages 5-12), the World Disabled Invitational (for the world’s top skiers with disabilities), the newest addition to the annual event, the AEC Cup (Architects, Engineers, Contractors), or the signature Corporate Challenge event (for six-person teams of five amateur corporate skiers and one skier with disability), all Wells Fargo Ski Cup races challenge the same 250-meter slalom course, which has 16 gates that skiers typically conquer in 15 to 30 seconds.

As exciting as the Ski Cup races are for fans and participants, Easton said she really enjoys the personal connections made and lives changed. Each year, she said, the event results in a new volunteer, a new financial supporter, and a new sport or life goal achieved. “When the races are over and the banners come down and everyone leaves the resort, what lingers are the friendships made and the experience of seeing what these amazing people are capable of doing,” said Easton

The 45th Wells Fargo Ski Cup takes place this weekend at Winter Park Ski Resort and features four races, a silent auction, and other fundraising activities that will draw close to 5,000 disabled and amateur skiers, snowboarders, celebrities, NSCD and corporate guests. This is the 50th anniversary for the National Sports Center for the Disabled and “The Wells Fargo Ski Cup is NSCD’s signature fundraiser,” Easton said, adding, “We invite participants and sponsors to spend a weekend with us doing what we do every day of the year. Enabling the human spirit through sports.”

For more information about donating or volunteering for this amazing group, visit www.NSCD.org.