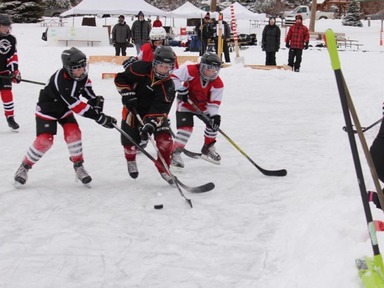 Hockey enthusiasts can look forward to a weekend of ice hockey on Grand Lake this Saturday and Sunday as the 2nd annual Grand Lake Pond Hockey Classic (GLPHC) gets underway. The event is hosted as a partnership between the Grand Lake Chamber and Fraser Valley Hockey Association (FVHA), with collaborated efforts of Parker’s Platoon and Warrior Av’s. 100% of the profits from the event go to local charities and nonprofits. 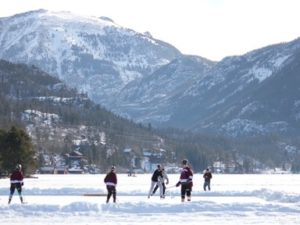 “If there is such a thing as a perfect hockey game, it would likely take place on a frozen pond”, said Fraser Valley Hockey Association’s Safesport Coordinator, Kim Ducklow. “It’s where the sport was born. The pond embodies the true spirit of hockey.”

Pond Hockey is played in a smaller space on lake ice which has been plowed, shoveled, and flooded and frozen several times. It is very different than an ice rink, with cracks, bumps and imperfections. Pond Hockey is played 3-on-3 with no goalies versus rink hockey 6-on-6, including a goalie. Instead of large metal nets, pond hockey uses flat wooden pond hockey goals with 2 slots to put the puck in. Differing from rink hockey, “it is more like the original game: no referees, no goalies, no checking, no snapshots, no lifting the puck in the air higher than the waist, no icing calls, and no offsides. The games are self-started and are much shorter, with only 10 minute periods. It’s like playing with your friends when you were a kid!”, said Ducklow. 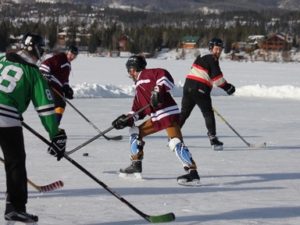 Located just off the public beach in Grand Lake, teams will play 3-on-3, self-started on center ice using rock/paper/scissors to determine possession. Each game is comprised of two 10-minute periods. “We played 15 minute periods last year, but that proved to be far too long”, said Adult Hockey Coordinator, Brian Blumenfeld. Every team is guaranteed to play at least 3 games.

The Youth Tournament takes place on Sunday, February 3rd and gets started at 9 am. Prizes will be awarded to the three division champions (8 & under; ages 9-13; and, 14 & up). The $20 donation goes to Fraser Valley Hockey Association’s Youth Programs. “The Youth event is free with a donation this year and will be switching to full team registrations in 2020”, said Ducklow.

The awards ceremony takes place at Pancho & Lefty’s each day after tournament finals have ended. On Sunday, all are encouraged to stay and watch the Super Bowl.

Ducklow told me, “This weekend is our ‘Coaches Appreciation’ weekend. FVHA gave all of the coaches the weekend off to play in the pond hockey tournament”. As a result, “we have seen a large increase in participation this year, with a record 45 adult teams registered”. 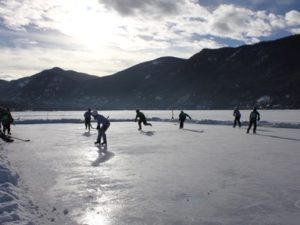 During the event, the Fraser Valley Hockey Association (FVHA) will be selling NHL Logo Walkin’ Waffles, hot dogs and hot beverages (Bring CASH). There will also be a Beer Tent, sponsored by Winter Park WIne and Spirits (alcohol must remain on the lake ice), with snacks and GLPHC swag also available. 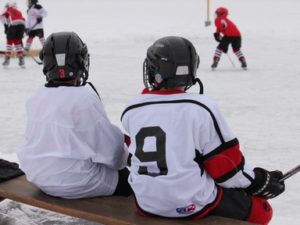 Local Hockey Kids will also be walking around with a “Fill the Skate” Campaign, to support Fraser Valley Hockey Youth Programs. A few bucks helps pay for ice-time, referees, tournaments, scholarships and equipment.

The entire event is put on by a team of volunteers. “We are hoping for 6+ rinks, however, they are very time-consuming and labor intensive to build, and there are not enough volunteers to help. We could use more community support in pond building, for sure”, said Ducklow. “We can also use help from volunteers all weekend to help set-up, shovel, keep score/time, etc.” Volunteers interested in helping out this weekend can email: GrandLakePondHockey@gmail.com or Fraserhockeyvolunteers@gmail.com, or call (303) 883-7200.

“We invite spectators to come watch the action, grab a waffle and coffee, or beer and a hot dog and enjoy the party!”, said Ducklow, adding, “all should keep in mind that the event occurs on a frozen lake, which has natural risks and hazards. Participants and spectators are responsible for their own safety. It is important to be aware of your surroundings at all times”.

“We could not have made this tournament happen without the support of our volunteers and our generous sponsors”, said Ducklow. To learn more about this weekend’s event, visit grandlakepondhockey.com.