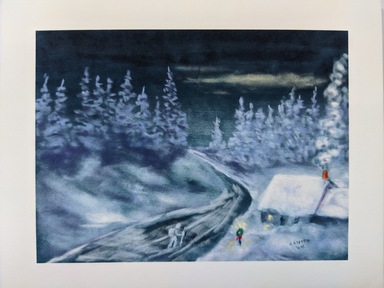 Editors Note: This is a true story written by the late Fran Cassidy. The Crawford Family founded Steamboat Springs. For one winter they stayed at Hot Sulphur Springs. Charles W. Royer rode his horse 60 miles as a real-life Santa Claus.

Jimmy and Maggie Crawford settled in Hot Sulphur Springs in June of 1874.  They left their farm in Missouri with their three children, John not yet two, Logan 4 and Lulie 7 years old to begin a new life in Colorado. The one room cabin was built of round logs and had a sod roof.  In several places outside light could be seen between the logs. The floor was packed earth covered with elk skins which smelled while drying out after a rain or melting snow.  The sod roof was far from water proof.  When the children came down with scarlet fever Jimmy promised to cover the roof with wood shingles and had gone to Billy Cozens’ sawmill to make them.  Mr. Cozens was very helpful and even gave Jimmy a rusty iron stove to take back home.  Rusty or not, to Maggie it was like new.  She was most appreciative.  The shingles were carefully stacked by the cabin but never made it to the roof.

Jimmy carefully explored the area for suitable pasture land for his small cattle herd.  His explorations took him further and further to the west of Hot Sulphur Springs and as fall approached he became desperate to locate suitable grazing pasture before the snows.  Although Jimmy would return home every few weeks, the time in between his visits became longer and longer as he moved his cows to the west.  Maggie was faced with many hardships in his absence.  Ute Indians would quietly appear, seemingly from nowhere, and ask for food or as in one instance, ask to trade a pony for the little boy John which she of course adamantly refused.  Maggie was able to keep friendly relations with the Utes but never comfortable when they appeared.  The conversations were limited to jesters, hand language and a variety of facial expressions.

But this is a Christmas Story. To begin with, mountain men, prospectors and just plain loafers from Georgetown would stop by the Crawford’s for a meal when they were in the area.  Maggie would never refuse them.  A few weeks before Christmas four prospectors enjoyed a delicious venison stew with Maggie and the three children.  Lulie, told the visitors how she was going to hang a stocking at the foot of the bed for Santa Claus to fill with toys and candy.  Her two brothers shook their heads in agreement.  Maggie said, “Lulie, I really don’t think Santa Claus could find us way out here in Colorado!”  She knew there was nothing she had to fill the stockings except maybe some sugar candy which would likely be a disappointment for each of them.  Their Christmases in Missouri were memorable with presents, candies and fruit.   One of the four prospectors listened intently to Lulie as she described the Crawford’s last Christmas in Missouri.  He had introduced himself as Charley Royer.  Charley was 22 years old, recently from Kentucky now working in the silver mines near Georgetown. After a very satisfying lunch the men left and a heavy snow began to fall.

By Christmas Eve the snow was deep and drifts were high. The temperature dropped to minus zero.  Although Jimmy had promised to be back for Christmas, Maggie thought the snow too deep for him to travel.  He had located what he called the perfect pasture far to the west and had made a land claim close to a bubbling sulphur spring.  He told Maggie it reminded him of the sound steamboats made on the Missouri River and named his land claim, “Steamboat Springs.”   Alone with the children, Maggie read the bible story of Christmas.  Before dropping off to sleep, Lulie said, “I know Santa Claus will find us, I just know he will!”  Maggie sadly shook her head.  Hours later, close to midnight, there was a gentle knock on the door.  Maggie cautiously opened the door hoping it would not invite trouble.  To her surprise it was the young Charley Royer.  He held out a gunny sack and said, “Mam, I’ve brought oranges, hope they haven’t frozen, some candy and a few toys for the children.  Please tell them Santa Claus did know where they lived.  I remember how important Christmas was for me and I wish you and your family a Happy Christmas.”  He turned and walked back into the darkness.  Charley Royer had come 60 miles from Georgetown in the bitter cold and heavy snow to make three little children happy on Christmas morning with oranges no less, in the middle of winter, toys and candy, a Christmas they would never forget. Jimmy made it home on Christmas day to add to the joy.  The following year and many years after the Crawford’s had Christmas in a comfortable ranch house in a place called “Steamboat Springs.”  As for what the future held for Charley Royer, well that’s a story for another time.