Man-Comfort in the Mountains of Colorado 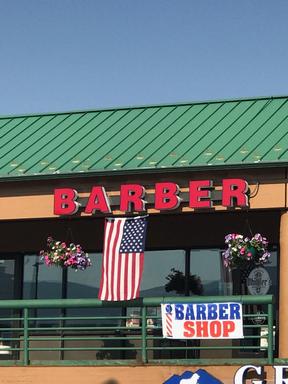 Two weeks ago, my son was married in Grand County to a beautiful young woman. It was a magnificent ceremony and friends and family came from all over the U.S. and even as far away as Europe and Australia.

My task was, in theory, simple – think of something new and original for the male family members to partake in together. My wife gave me the solution (and motivation) for an original treat – a man’s version of a Mani/Pedi.

The solution was found at Whittlers barber shop, just a few doors down from Murdoch’s and near the Home James second floor office. I came across the solution this last winter. On a rather cold and snowy day I dropped by Whittlers for a haircut and hot shave. I had never had a hot shave before and thought it was time to give it try.

The owner of the barber shop, Jason Whittler, proved to be a master at his craft. At the end I did not have as much as a nick. And while the feel of a clean, close shave was what I wanted, it was the experience that brought me back for another hot shave.

The process of a hot shave is straight forward, with each step a bit more relaxing. As Jason explained it, there are several steps he follows: First, Jason applies a conditioner to soften the hair; after that he applies a hot towel and lets it sit awhile during which time he hand-mixes and whips the shaving lather, then; he starts the shave focusing on the customer’s desired look and minimizing the “strokes” to complete a shave. He then checks for any rough spots and does a once-over as needed. Finally, Jason does a clean-up and re-wraps your face with a cool towel to help close the pores and cool your face. If requested (as I did) he’ll also touch up your neckline. 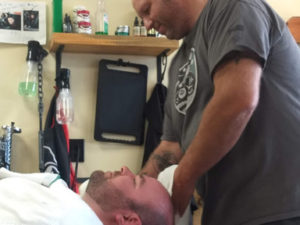 On the day of the wedding Jason blocked off 4 hours to give a hot shave to anyone attending the wedding. The star of course was my son. A hot shave was not new to him because years ago he regularly received a hot shave while living and working in London. As with many young men these days, he has that 3-day old beard look. Jason went through the entire process with him and trimmed the beard to my son’s specifications. It was a good start to a rather excellent day.

After nearly 3 hours and numerous hot shaves, I think everyone who partook found some man-comfort in the mountains! For me, mission accomplished.

Jason also told me that the hot shave has become so popular that he now has a few customers that come in weekly just for the hot shave. I can now vouch for the power of the hot shave to relax anyone and start their day off right. Give it a try.  https://www.facebook.com/whittlersbarber

Please send any comments to Bebarwick@gmail.com.