Keith Sanders: A Man For All Seasons 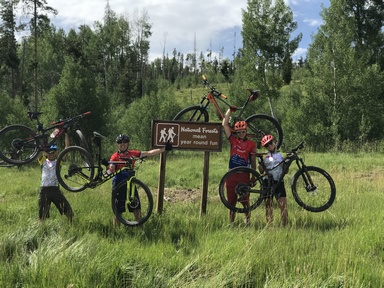 Photo: The Fraser Valley has some of the most spectacular biking trails right in our own backyard!  Photo courtesy Paula Isakson

Living the dream in a Colorado mountain town is one many hope to achieve, but few have done it so successfully as Keith Sanders. The owner of 3 ski rental shops, Beavers Sports, Ski4less, Snow Mountain Sports, bike shop Beavers Sports Shop and Clean Sweeps, Sanders has found the perfect balance of business to mix with a lifetime of recreation.

In 1980, Sanders moved to the valley from Boulder to join Winter Park Resort’s Freestyle Ski program. “I fell in love with the summers and was fortunate enough to scratch out a living to be a glorified ski bum.” He skied moguls competitively and then worked as a moguls coach. “Where else do you get paid to go skiing with your friends?” His career led him to retail, working with product companies and testing. “My work in retail and the connections I made got things going and kept me going for several years,” Sanders recalls. 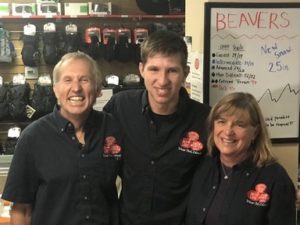 He opened his first ski shop in the rear of the Raintree Inn (now known as Winter Park Mountain Lodge) in 1995. “When we started the ski rental shop, we had one and a half employees and myself. My wife worked at another company – we didn’t want to put all our eggs in one basket,” Sanders jokes. The little shop flourished and he has since added locations in downtown Winter Park and at Snow Mountain Ranch.

His wife, Ann, now works full-time, alongside her husband of 27 years. “Ann is so much my right hand and integral to our business. She’s very involved in the business, putting the glue in the right place to hold it all together. She gives the reality check and keeps me on track.”

Beavers Sports  is unique to the valley in that the stores specialize solely in ski rentals in the winter and then Beavers Sports Shop shifts to a full bike shop in the summer. He lets other shops handle the ski retail side and specialty equipment rentals. `You don’t have to compete on every level  – the market isn’t there,” says Sanders. Beavers rentals come with an ‘only pay for the days you ski’ clause, which works well for the price-conscious. “We have always focused on the customer, providing the highest level of service at all times,” says Sanders. Many of those customers return, year after year. “I’ve been doing this so long, I am now fitting my customer’s grandkids for skis,” he laughs.

On the recreational side of life, Sanders is an avid cyclist and fisherman in summer and skier in the winter. His trophy case includes three Mountain Bike National Championships. While he no longer races competitively, he is still out skiing, fishing and riding as much as he can.

A little over a week ago, an unfortunate turn at the bottom of a chute in Montana resulted in an achilles rupture and subsequent surgery. Even while recovering, he is already making plans for summer rides. Rehabilitation and Physical Therapy will just become part of his training.

“One of the obstacles I have now is that I always like to go fishing for lake trout on Lake Granby when the ice comes off,” says Sanders. “Since boat docks don’t go in until the end of really good early season fishing, I’m trying to figure out how I am going to get in and out of my boat.” According to Sanders, great early fishing for lake trout starts mid-April. Catching fish up to 30 pounds, he practices ‘catch and release’ with fish that size. “That fish could be 20-30 years old. It’s like a powder day – when it’s gone, it’s gone. You can’t get it back.” 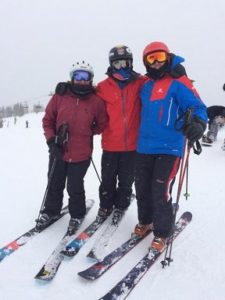 Ann, Aaron and Keith Sanders out enjoying one of this year’s many epic powder days. Photo courtesy Paula Isakson

Aaron Sanders grew up in his parent’s business, working as a ski and snowboard technician at the shops as well as attending industry trade shows. He’s just finishing up his freshman year at Montana State and plans to pursue a degree in Business. “He loves skiing and he’s doing a lot of it. I was a bit worried, but his grades are better in college than they were in high school,” said Sanders. He added that, so far, he’s only had to show up to class once in ski clothes.

An active trails advocate, Keith recognized the importance of our trail systems early on. In 2012, he formed the nonprofit Grand Mountain Bike Alliance, setting a goal of enhancing the mountain biking experience in the Fraser River Valley and surrounding area. The Alliance coordinates often with Headwaters Trails Alliance, especially on the trails Smart-Sizing project. “It’s really nice to see that group evolve to where they are today,” said Sanders. “A lot of people benefit from the efforts of very, very few. To see some visions turn into realities has been pretty cool.”

There really is no downtime for the Sanders family. In summer and winter, Beavers Sports keeps them busy with bike and ski rentals and service. From spring through fall, Clean Sweeps, his chimney sweep and dryer duct cleaning business fills whatever might have once been a void.

A non-tourist-based business that didn’t ebb and flow with the seasons had its appeal. Sanders obtained certification through the Chimney Sweep Institute of America in Indianapolis. “It was more like an engineering course than a certification class,” he said. “I learned about code and safety as well as the dynamics – what it takes to make that product work really well.” Since he started Clean Sweeps in 2010, it’s been a successful endeavor. “I would run it year-round if I had the staff to support it,” says Sanders.

Between the two businesses, Sanders is proud to be able to offer his staff year-round employment. “Shared staff allows me to make an investment in my employees until they take that next stepping stone in their career.” He notes that the business’ size limits the number of employees he can keep long-term. “When I see them move on, it’s exciting for me. It is nice to see them take that next step.”

“Right now, I have a really good balance that allows me to get out and play. In the winter you’re going to find me on some sort of ski, and in the summer, I’ll bike. I want to enjoy all the different aspects of why we are here,” says Sanders. “No one wants to work forever. At some point, we’ll figure out an exit strategy, but first, we have 3 more years of college to pay for.”