When you’re just starting out on the trail of life, finding a good job can be a challenge.  A tapestry of work experiences shape your spirit and inspire your passions. It’s often a period where you juggle to make ends meet. A young college student, Jennifer Brown was looking to make an extra buck during that period in her journey when she decided to try her hand at making soap.  She played carpet bagger on the weekends while balancing work and college life.  Craft shows, events and festivals became a part of her weekend routine. One of her early hooks to boost sales was to tie a small rubber duck to her bars of soap as incentive to purchase.  One day, a guy said, “I just want the duck”. A lightbulb went off.  That was the beginning of the “Rubber Duck empire” in Grand Lake.

Somewhere along the trail of festivals, Jennifer met Steve Kudron. Steve was a nine to five corporate executive, quite bored with that kind of life.  Together, the couple decided to make a change.  They bought a travel trailer and headed out across the country selling handmade soap and rubber ducks.

The Soap and Duck business was really good, and, eventually, the travel trailer turned into a brick and mortar store in Englewood, Colorado.  The business was so good, they added a second store in Manitou Springs. In my conversation with Jennifer Brown, she said, “ We use two F words in our home, but, they’re not the ones you are thinking”. The comment took shape as she described a hot and windy summer day on June 23rd, 2012.  It was the day that fire exploded in the canyons surrounding Manitou Springs, and, it closed the town for weeks.  As if that wasn’t enough, in August of the following summer, the main stream through that little mountain community, Fountain Creek, flooded its banks and wiped out their entire store. Fire and Flood destroyed a big part of their livelihood. 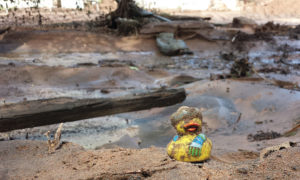 A mud- and sand-covered survivor of the flood at a previous incarnation of the gift shop in Manitou Springs. Photo courtesy of Steve Kudron

One day, a well-dressed man with a Bolo-style tie walked into the Englewood store.  He browsed around their store for a bit, finally approaching the counter and said, “I want your store in Grand Lake, Colorado.  I will find you a home.” A couple of weeks later, the man came back, and, this time, he introduced himself, “My name is Bob Scott, and, I have found the perfect place.”  The couple decided to make the move to Grand Lake and fell in love with the little village in the mountains. Brown says, “My soul is at rest here.”

Today, Quacker Gift Shop in Grand Lake is exactly that, a unique gift shop but, rubber ducks are not the aroma that wafts from the store. Walk by and you are drawn in by the smell of roasted almonds and cashews, homemade fudge, and hot sauces from around the country.  Gary Graham, the master of quippy one-liners, greets visitors with “Hi, thanks for ducking in!” 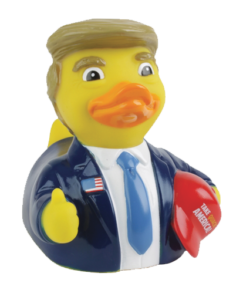 Steve Kudron estimates that they sell about a quarter of a million rubber ducks a year.  The majority of sales are online as a wholesaler, but a good lot are sold from their store, as well.  The couple also sponsors a charitable duck race every year on Tonahutu Creek.  Stop in a check out their newest addition to the custom rubber duck collection, Grand Lake’s Celebri-moose.

The rest of this story is still unfolding, but, today, Steve and Jennifer are proud to expand their business on the boardwalk with a womens boutique that specializes in apparel, accessories, and, of course, the famous Delish bath and body products. The Mountain Gal is next door to Quacker Gifts.  Stop by and if you’re lucky, you might even get a tour of the Soap Factory upstairs.

Take a quick peek in our video interview with Jennifer Brown, founder of Delish Bath and Body products at winterparktimes.com.  Next time you’re in Grand Lake, make sure you duck in and say hello! 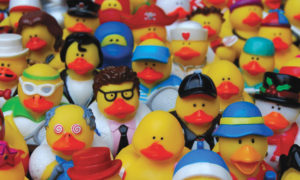 A Brief History of Rubber Ducks

If you don’t know what a rubber duck is you have probably just emerged from a cave or crawled out from under your sacred hiding spot. The yellow rubber duck has achieved an iconic status in Western pop culture and is often symbolically linked to bathing.

The history of the rubber duck is linked to the emergence of rubber manufacturing in the late 19th century. The earliest rubber ducks were made from Charles Goodyear’s invention, vulcanized rubber. The early rendition didn’t float, they were used as  chew toys.

In the 1940’s, sculptor Peter Ganine created a duck then patented it and reproduced it as a floating toy. Believe it or not 50,000,000 were sold.

Jim Henson popularized rubber ducks in 1969, performing the song “Rubber Duckie” as Ernie, a popular Muppet from Sesame Street. Ernie frequently spoke to his duck and carried it with him in other segments of the show. On a special occasion, Little Richard performed the song. 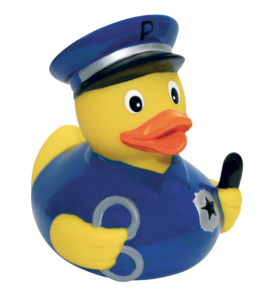 C.W. McCall’s hit song “Convoy” (and the movie and novel it inspired) are narrated from the viewpoint of a character who replaced the bulldog hood ornament on his Mack truck with a bathtub toy and used the on-air handle of “Rubber Duck”.

There have been numerous novelty variations on the basic theme, including character ducks representing professions, politicians, or licensed individual celebrities. There are also ducks that glow in the dark, change color, have interior LED illumination, or include a wind-up engine that enables them to “swim”.

In 2001, The Sun, a British tabloid newspaper reported that Queen Elizabeth II has a rubber duck in her bathroom that wears an inflatable crown. The duck was spotted by a workman who was repainting her bathroom.  The story prompted sales of rubber ducks in the United Kingdom to increase by 80% for a short period.